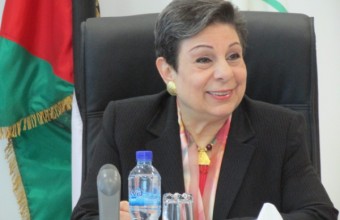 Dr. Hanan Ashrawi of the PLO Executive Committee called on the international community and, in particular, the European Union to continue in upgrading its relations with Palestine, and its recognition of the State of Palestine, as well as in curbing the Israel’s persistent violations and unilateral measures.Ashrawi stressed, ‘We will pursue reconciliation seriously in the same way as we will implement our obligations under international law and the conventions to which we have acceded, and develop further steps according to our needs in compliance with our plans.’

During a meeting with representatives from the EU, UN and the PLO, parties discussed the latest political developments in Palestine, including the reconciliation agreement signed between Fateh and Hamas, Israel’s illegal violations against the Palestinian people, the importance of the European role in bringing an end to the illegal occupation — particularly its illegal settlement activity — apartheid walls, home demolitions, the revocation of the residency status of thousands of Palestinians living in Jerusalem, the abuse and torture of Palestinian prisoners and detainees, the annexation of land in Area C, its continued siege and blockade of the Gaza Strip, and the isolation of Jerusalem from its Palestinian environs, the Palestinian News Network has reported.

The meeting also covered Palestine’s recent joinup with a number of multilateral treaties and conventions, as well as one UN organization.

By the beginning of April of this year, according to the General Assembly’s Resolution which recognized Palestine as an observer State in the United Nations in late 2012, Palestinian President Mahmoud Abbas had signed letters acceding to 15 international conventions, including those related to the international humanitarian and human rights law. Those accessions, which had already been sent, do not need to be deposited with the UN Secretary-General in order to activate Palestine’s membership in them. Eight of these conventions are related to human rights:

1- The 1966 International Covenant on Civil and Political Rights;

2- The 1966 International Covenant on Economic, Social and Cultural Rights;

3- The 1984 Convention against Torture and other cruel, inhuman or degrading Treatment or Punishment;

4- The 1979 Convention on the Elimination of All Forms of Discrimination against Women (CEDAW);

5-The 1965 International Convention on the Elimination of All Forms of Racial Discrimination;

6- The 2003 International Convention against Corruption;

8- The 2006 Convention on the Rights of Persons with Disabilities.

Palestine has acceded also to 6 conventions related to the international humanitarian law:

1- The 1949 First Geneva Convention for the Amelioration of the Condition of the Wounded and Sick in Armed Forces in the Field;

2-1949 Second Geneva Convention for the Amelioration of the Wounded, Sick and Shipwrecked Members of Armed Forces at Sea;

3- 1949 Third Geneva Convention relative to the Treatment of Prisoners of War;

4- 1949 Fourth Geneva Convention relative to the Protection of Civilian Persons in Time of War;

5- 1977 Additional Protocol I to the Geneva Conventions relating to the Protection of Victims of International Armed Conflicts; and

6- 1907 Hague Convention on the Laws and Customs of War on Land.

Palestine has also deposited its accession to two conventions relative to obliging States to prevent and punish international crimes:

2- 1985 Convention on the Prevention and Punishment of the Crime of Apartheid.

The importance of these conventions lies in that it will reiterating the international legal obligation of the Israeli authorities to respect the laws of war, in particular the Fourth Geneva Convention and Protocol I and the Hague Convention on the Laws and Customs of War on Land, which set obligations on the occupying power to protect civilians in the case of armed conflicts and prohibit attacking or transferring them or establishing settlements considering them as war crimes. At the same time, these conventions set an obligation on all the member States to work on ensuring the application of this convention in all circumstances.

The Palestinian Center for Human Rights stresses that this Palestinian step will never practically achieve the purpose behind it unless it is followed by other steps to accede to all international conventions relevant to human rights and international humanitarian law, particularly:

1- The 1998 Rome Statute of the International Criminal Court, which will guarantee the prosecution of Israeli war criminals;

2- The First Optional Protocol to the International Covenant on Civil and Political Rights 1966, which will ensure the right of individuals and groups to resort to international mechanisms of judicial remedy;

3- Second Optional Protocol to the International Covenant on Civil and Political Rights, aiming at the abolition of the death penalty 1989;

4- The Optional Protocol to the Convention on the Elimination of All Forms of Discrimination against Women 1999, which will ensure the right of individuals and groups to resort to international mechanisms of judicial remedy; and

5- The Optional Protocol to the Convention against Torture 2002, which offers international and practical mechanisms to confirm the application of this Convention.