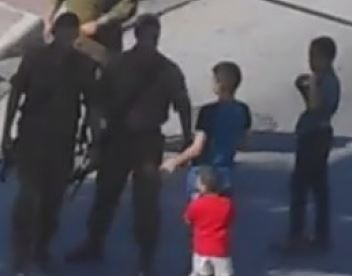 Palestinian security sources stated that Israeli soldiers detained, late on Friday at night, two Palestinian children in Sielet al-Harethiyya village, west of the northern West Bank city of Jenin, and interrogated them for several hours.The sources said dozens of soldiers invaded the village, and kidnapped two children, identified as Saleh Abbas Mahmoud and Walid Imad Ahmad, and took them to the Salem Military Base.

The two children were interrogated for several hours, while their families had no idea of their whereabouts.

The Palestinian District Coordination Office contacted its Israeli counterpart, and inquired about the children, and the army released them later on.

It is worth mentioning that Israeli soldiers kidnapped and imprisoned more than 10.000 Palestinian children since the beginning of the al-Aqsa Intifada, in late September 2000.