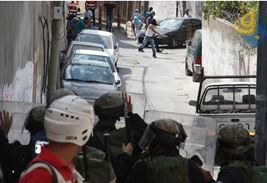 [Sunday at Dawn, May 3, 2014] Palestinian medical sources have reported that five residents have been wounded after Israeli soldiers invaded the central West Bank city of Salfit.Eyewitnesses said several Israeli military jeeps invaded the city, firing dozens of gas bombs and concussion grenades at local residents and causing five to suffer the effects of tear gas inhalation.

In addition, soldiers damaged a Palestinian car belonging to a resident identified as Nael Yousef Marabta, after ramming it with their jeep, as it was parked in front of his home, the Ma’an News Agency has reported.

Also on Sunday, soldiers invaded various districts in the occupied West Bank, broke into and searched dozens of homes, and handed a number of residents military notices ordering them to head to nearby military bases for interrogation.