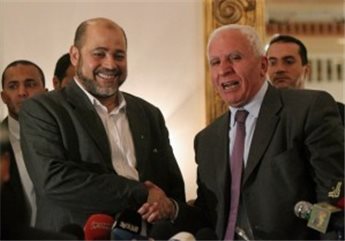 Senior member of Fatah and reconciliation officiator Azzam al-Ahmad arrived in Gaza, Tuesday evening, via Erez Beit Hanoun crossing, to discuss the formation of a unity government with Hamas.Fatah spokesman Fayez Abu Atiyeh told Ma’an News Agency that al-Ahmad’s visit to Gaza is a part of ongoing efforts to implement the April reconciliation deal that was signed between Hamas and the PLO.

Senior Hamas official Salah Al-Bardaweel said, in a statement to Al Ray, that Azzam al-Ahmad came to discuss general issues with Hamas, with a focus on the formation of a national unity government.

The division between Fatah and Hamas began in 2006, with Hamas’ victory in Palestinian legislative elections.

The following year, clashes erupted between the parties, leaving Hamas in control of the Gaza Strip and Fatah of parts of the occupied West Bank.

On April 23, Hamas and Fatah signed a deal in Gaza, with the aim of repairing relations that have been dysfunctional since 2007, and future hopes based on legislative and presidential elections to be held in both the occupied West Bank and the Gaza Strip.