Palestine to Receive Fuel from Venezuela 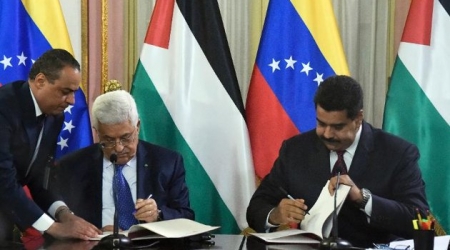 President of Venezuela Nicolas Maduro has pledged to send oil and diesel to the Palestinian Authority, as part of agreements signed in Caracas with Palestinian President Mahmoud Abbas.The country of Venezuela gained recognition worldwide for its nationalization of what is said to be some of the world’s largest oil reserves and, according to AFP, has promised to provide Palestine with an initial shipment of 240,000 barrels.

‘Thanks to Venezuela for supporting Palestine… to break Israel’s monopoly on our economy, for your response to our needs, for your willingness to support the Palestinian people in their long struggle,’ Abbas was quoted to say.

Abbas met with President Maduro, Friday, as part of an official visit to Venezuela to fortify bilateral relations between the two countries.

The visit comes during a time of bloody protest and political dissent, for Venezuela, that encompassed the region since February.

Maduro has called the unrest, which has claimed at least 42 lives, AFP went on to say, a coup attempt backed by the United States, which has raised tensions with Washington representatives, who have repeatedly denied the accusation.