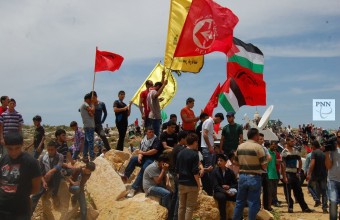 Palestinians attended, on Friday, the funerals of Nadeem Siyam Nuwara, age 15, and Mohammad Odeh Abu al-Thahir, 17, who were shot dead by Israeli forces during a demonstration in commemoration of the Nakba (Catastrophe) of 1948, in which an estimated 700,000 Palestinians fled or were expelled from their homelands by Israeli colonizers, and have since become the largest refugee group in the world.At approximately 11 am, according to the PNN, a crowd gathered near the Palestine Medical Complex, where the bodies of the two boys lay, and began a funeral march towards Birzeit.

Numerous cars and hundreds of people took part in the procession, carrying flags from all different political parties, and ending with a public prayer.

Once finished, the PNN reports, the boys were taken to their respective villages, Abu Shukheidim and al-Mazraa al-Qibliya, where they were buried.

Several called for revenge, with others stressing that the blood of the two youngsters should not be wasted.

They condemned Israel for its crimes against the Palestinian people and called for the unity of all political factions to fight the illegal Israeli occupation of their lands.

Although the majority of Palestinians were expelled from their homes during the 1948 conflict which led to the creation of the state of Israel, some managed to remain and their descendants, today, make up around 20 percent of Israel’s population.

Palestinians make up the largest refugee group in the world, according to UN statistics which, by 2010, had designated nearly 5 million Palestinians with official refugee status.

UNRWA has estimated that there were more than 7.2 million Palestinian refugees and displaced persons at the end of 2005, according to The Institute for Middle East Understanding (IMEU).