A Palestinian man was shot and injured by Israeli forces in northern Gaza, on Monday, in the second incident of its kind in 24 hours, according to locals. In the West Bank, east of Jerusalem, a number of Palestinian-owned structures were demolished by the Israeli military, leaving 15 people homeless.
Witnesses told Ma’an News Agency that a 20-year-old man was collecting stones to make concrete outside of Beit Hanoun, near Erez crossing, when Israeli forces shot him.

The young man, who was not immediately identified, sustained moderate wounds, Ma’an reports.

A spokeswoman from the Israeli army said that ‘dozens’ of Palestinians gathered in an area near the border which they were ‘not permitted’ to enter. She stated that they were warned to distance themselves, upon which warning shots were fired into the air. Soldiers then fired at the lower extremities of one, the spokeswoman said, identifying a hit.

Just Sunday, in the same area, a 21-year-old gravel worker was also shot by Israeli forces. The man was taken to Kamal Adwan Hospital in moderate condition.

Ma’an further reports that many people in the besieged coastal enclave collect small stones in order to make gravel for concrete, because the import of concrete is forbidden by the Israeli economic blockade, which has been in place since 2006.

Israeli soldiers frequently fire on farmers and other civilians inside the Strip, if they get too close to certain areas of land near the border which the Israeli military has closed off to Palestinians.

According to Israeli human rights organization B’Tselem, the number of live-fire casualties near the fence has been on the rise since last December.

Also on Monday, in al-Eizariya and the E1 area east of Jerusalem, Israeli bulldozers razed Palestinian structures and left 15 people homeless, according to a local official.

Secretary-general of the Bedouin Jahalin tribes, Sami Abu Ghaliya, said that Israeli authorities destroyed two small residential structures and four of agricultural nature belonging to his family at the entrance of the village.

Additionally, two structures used to house cattle were destroyed by Israeli bulldozers, in the al-Kasarat area in E1.

In nearby Jabal al-Baba, Ma’an reports that a tent belonging to Mahmoud Ibrahim Jahalin was destroyed, along with two animal sheds, according to Abu Ghaliya.

The tent was a donation to Jahalin following the demolition of his home at the beginning of April.

Israel rarely allows Palestinians to build in the West Bank, including East Jerusalem. They are responsible for the demolition of at least 27,000 Palestinian homes and structures since first occupying the West Bank in 1967, according to the Israeli Committee Against House Demolitions.

More than 500,000 Israeli settlers live in settlements across the West Bank and East Jerusalem, in direct defiance of international law. 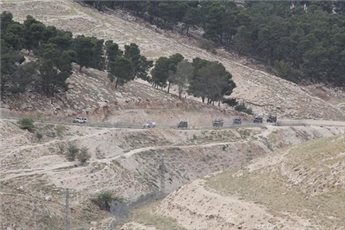