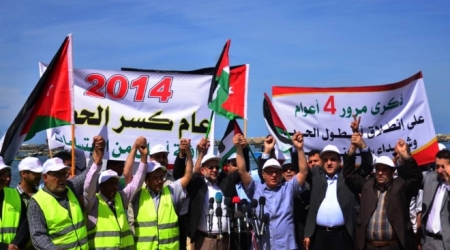 Monday marked the 4th anniversary of the Israeli massacre, in international waters, on board the Turkish vessel Mavi Marmara. In commemoration, dozens of Palestinians and Arab activists staged a march of boats.
Members of Miles of Smiles and Lifeline convoys, which accessed the Strip on Sunday evening, participated in the event, which was organized by the Popular Committee to Break the Siege, according to Al Ray.

Palestinian and Turkish flags were raised, with banners calling upon the international community to lift the siege on Gaza, which has entered its eighth year, and to bring attention to the humanitarian crisis facing Palestinians there.

The participants of the parade also urged the governments of Gaza and the West Bank to focus their efforts on ending the internal division that is only of interest to the Israeli occupation.