Al-Hamdallah: “No Peace Agreement, Or Truce, Without Releasing All Detainees” 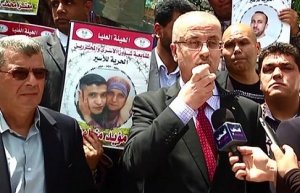 [Tuesday, May 20, 2014] Palestinian Prime Minister, Rami al-Hamdallah, stated there can be no peace with Israel, or even a truce, without the release of all Palestinian political prisoners held by the Israeli occupation.His statements came while talking to protesters in front of the Red Cross office in al-Biereh town, near the central West Bank city of Ramallah, the Watan News Agency has reported.

Hundreds of Palestinians held their weekly protest in front of the Red Cross, demanding the release of their detained family members, and demanding an end to the illegitimate Israeli occupation of Palestine.

He said that the Palestinian government is holding talks with various countries and international human rights groups to ensure the release of all detainees.

Head of the Palestinian Prisoners Society (PPS), Qaddoura Fares, demanded all factions to meet, discuss the issue of the detainees, and to determine an agenda and a plan for supporting the detainees and their cause, locally, regionally and internationally.

On his part, Hasan Yousef, a political leader of Hamas, declared his movement’s support of any agreement that would help and support the detainees, and that Palestinian unity plays an essential role in advancing their cause.

Meanwhile, Palestinian detainees, held by Israel under arbitrary Administrative Detention policies without charges, are ongoing with their hunger strike they started 27 days ago, while a number of striking detainees are in very serious health conditions.