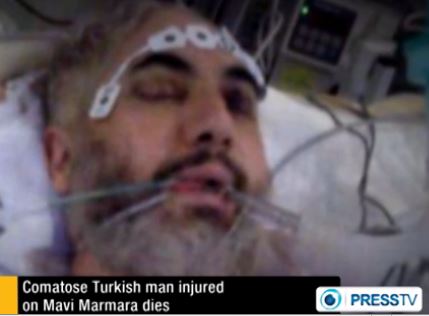 After more than four years in a coma, a Turkish man has died of serious injuries he suffered after Israel’s navy attacked, in international waters, the MV Marmara solidarity ship, part of the Freedom Flotilla, killing nine activists and wounding dozens more.Turkish sources said Ugur Suleyman Soylemez, 51 years of age, had remained in a coma since the May 31, 2010 Israeli attack on the ship while in was in international waters in the Mediterranean.

During the attack, Israeli soldiers shot and killed nine Turkish activists, and injured at least 50 others.

The MV Marmara ship was part of a convoy of six solidarity ships trying to deliver urgently needed medical and humanitarian supplies to the besieged Gaza Strip.

Press TV reported, on Thursday, that the Turkish Humanitarian Relief Foundation (IHH) said it is not willing to accept Israeli compensation in exchange for dropping the lawsuit against Israel and the officials in charge of the attack.

The statement came after Tel Aviv “apologized” for its deadly attack, and said it is willing to pay compensation to the families of the slain peace activists.

Press TV quoted Ugur Yildirim, a lawyer working for IHH, stating that Ankara and Tel Aviv are close to finalizing a compensation agreement, in exchange for dropping all charges and resuming normal relations.

However, Yildirim said that such an agreement is a clear violation of International Law, especially since the attack took place in International Waters, and the solidarity convoy was sailing to Gaza without any intention to enter Israeli waters.