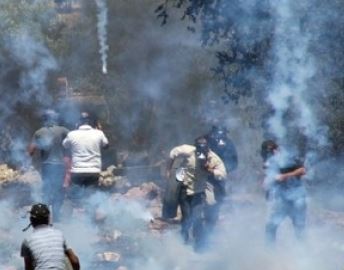 [Saturday, May 24, 2014] Palestinian medical sources have reported that three young men were shot and injured by Israeli army fire, after several military jeeps invaded the at-Tabaqa village, south of Doura town, in the southern West Bank district in Hebron.The three were shot during clashes which took place when the soldiers invaded the village, and clashes with local youths who hurled stones and empty bottles at them.

Soldiers also broke into several homes in the village, and searched them while interrogated various Palestinians.

In related news, soldiers invaded the al-Arroub refugee camp, in Hebron, and searched several homes after forcing the families out.