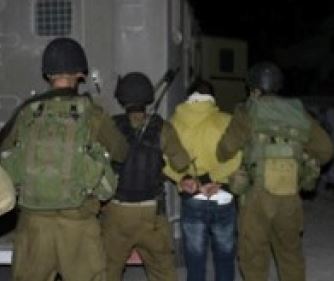 The army also handed resident Ahmad Yacoub Hammad, 20, a military order to head to the Etzion military base, south of Bethlehem, for interrogation.

Troops also invaded Nablus city, in the northern part of the West Bank, in addition to a number of towns and refugee camp, and kidnapped at least four Palestinians.

The Radio Bethlehem 2000 has reported that the soldiers invaded al-Quds Street, in Nablus, broke into a home and violently searched it, causing excessive property damage, and taking with them one Baha Ed-Deen Mansour, aged 26.

The kidnapped Palestinian is a former political prisoner who was held by Israeli for five years. The family said that the soldiers smashed the door and broke into their home as they slept.

Several jeeps also invaded a number of neighborhoods in Nablus city, in addition to the Askar and Balata refugee camps.

The soldiers also installed a roadblock between the towns of Aseera al-Qebliyya and Madama, south of Nablus, where they searched dozens of cars and interrogated the passengers while inspecting their ID cards.

The two were taken from the Salem Israeli military and security base, west of Jenin, after the army previously handed them military notices ordering them to go there for interrogation.

The Israeli army carries out daily invasions, arrests and assaults against the Palestinians in different parts of the occupied West Bank, in addition to installing roadblocks and closing main roads in the occupied territories, as well as uprooting Palestinian-owned farmlands and orchards, and destroying property.