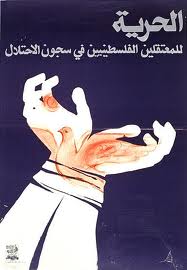 Hamarsha suffered a strike prior to his arrest more than four months ago, as he and his wife were trying to cross back into the West Bank through the al-Karama border terminal with Jordan.

In related news, the Hebron office of the Palestinian Prisoners Society, said that an Israeli Military Court ordered detainee Azzam Shweiki, from the southern West Bank city of Hebron, under Administrative Detention for an additional four months.

The order came just one day before he finished a previous illegitimate Administrative Detention order.

Shweiki, held at the Negev Detention Camp, suffers from various health issues, including a heart disease, and high blood pressure.

Hundreds of detainees are holding hunger strikes, demanding an end to Israel’s illegal Administrative Detention policies, and demanding Israel to abide by international law by stopping the assaults against them, and their families.

They are demanding Israel to grant them their internationally guaranteed rights, to provide ailing detainees with the much need proper medical treatment, and an end of all violations, including torture.

Ma’an News Agency has recently reported that all Palestinian prisoners who have been on hunger strike in Israeli custody since April 24 have been evacuated to hospitals after their health deteriorated seriously, according to lawyer Jawad Bulous, who works for the Palestinian Prisoner’s Society..

Hundreds Of Detainees Continue Their Strike, Many Hospitalized:
http://www.imemc.org/article/67949

More Than 30 Days Of Hunger Strike, And Their Battle Continues:
https://imemc.org/article/67919