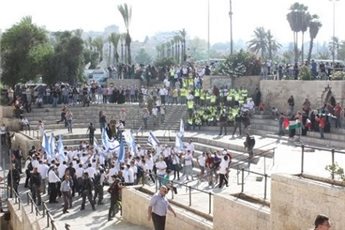 Nine Palestinians were abducted and three injured by Israeli forces after they violently dispersed a public protest, by Palestinians, in Jerusalem’s Old City.A multitude of Palestinians gathered near Damascus Gate, raising Palestinian flags in protest, on Wednesday, as thousands of Israeli Jews celebrated Israel’s occupation of East Jerusalem in 1967, also known as ‘Jerusalem Day’.

Forces fired tear gas and stun grenades as they assaulted the protesters with batons. Nine Palestinians were arrested during the protests, according to Ma’an.

Dozens are reported to have suffered bruises and the effects of tear gas inhalation, while three were rushed to a nearby hospital.

Ma’an further reports that over 75 percent of Palestinians, and 82 percent of children, live below the poverty line in East Jerusalem, according to the Association for Civil Rights in Israel:

Huge discrepancies between East and West Jerusalem have also been reported, in terms of education, health, water access, and planning, while Israel has also revoked the residency of 14,309 Palestinians since 1967, with 106 in 2013 alone.

14 percent of East Jerusalem has been zoned for Palestinian residential construction, according to ACRI, while one-third of Palestinian land has been confiscated, since 1967, for the purpose of building Jewish-only settlements, which are illegal under international law.

The so-called ‘separation wall’ has also cut off East Jerusalem from the West Bank, forcing nearly 100,000 Palestinians in various areas to live in abject poverty on the outskirts of the city.

60,000 – 80,000 Palestinians in these neighborhoods have been cut off from a regular water supply for over three months.