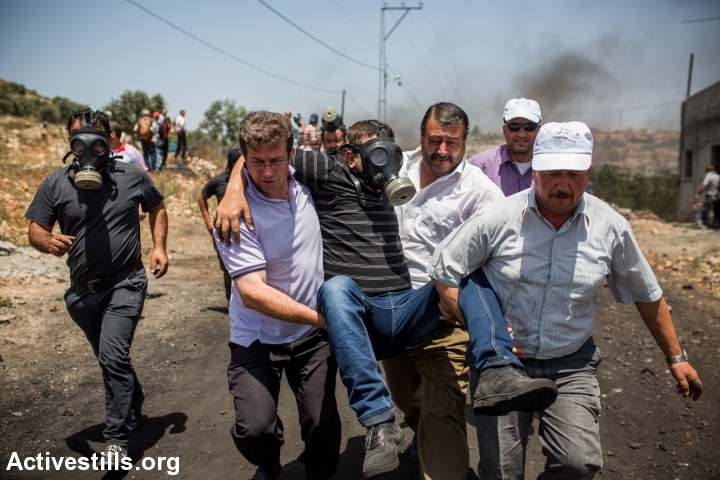 In Bil’in and Ni’lin, Israeli soldiers attacked the protesters as soon as they reached the gate of the wall that separates local farmers from their lands.

Troops stationed at the wall fired tear gas, stun grenades and rubber-coated steel bullets at the protesters in Bil’in and Nil’in.

In addition, a Danish peace activist required stitches for a leg wound sustained when she was struck by an Israeli tear gas canister.

At the nearby village of al Nabi Saleh, soldiers stopped the protest before leaving the village. Later, soldiers stormed the village and fired tear gas into residents’ homes, causing damage.

Meanwhile, Israeli troops attacked the villagers of al Ma’ssara and their supporters at village entrance then forced them back using rifle butts and batons. No injuries were reported.

Finally, in the village of Kafr Qaddoum, near Qalqilia, in the northern West Bank, one protester was struck in the back by a rubber-coated steel bullet, and a number of others suffered from tear gas inhalation.

Weekly non-violent protests have taken place in a number of West Bank villages every Friday, beginning in 2003. Most of the protests have been along the construction route of the Israeli Annexation Wall, and have focused on the illegal confiscation of Palestinian land, by Israeli troops, in order that they may annex it into Israel and separate the people from their land with the Annexation Wall.