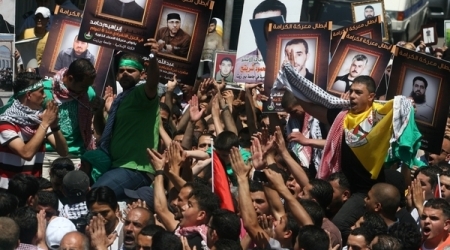 A march was organized in the West Bank by Hamas, on Friday, in solidarity with Palestinian administrative detainees in the Israeli jails. Furthermore, Palestinian President Mahmoud Abbas has taken a position to dissolve the Prisoners’ Ministry.Hundreds of Palestinians and lawmakers took part in the demonstration, beginning at the Al-Beireh Mosque and finishing at Al-Manara square, in the central West Bank city of Ramallah.

Al Ray reports that senior member of Hamas, MP Hassan Yousef, called on Palestinian resistance to capture another Israeli soldier to swap him with Palestinian prisoners.

Around 140 administrative detainees have been on strike for 38 days, in protest of Israel’s administrative detention policy, in which prisoners are held indefinitely, under severe conditions, and without charge or trial.

The Israeli prison administration recently distributed leaflets to Palestinian prisoners held in Israeli jails, in an official renege on a previous agreement with the prisoners reached in 2012 under the Egyptian auspices.

Under the previous agreement, 2,000 Palestinian prisoners ended their hunger strike with a promise by Israel to end the policy itself but, as of March 1, 183 Palestinians were still being held under administrative detention.

The current strike was launched April 24, by 80 detainees, and many have since joined.

Issa Qaraqe, Palestinian minister of prisoners’ affairs, said today that 1,500 Palestinian prisoners would join a mass hunger strike on Sunday, warning of deteriorating health conditions of more than 100 who have been on strike for over a month.

He fears that ‘there might be martyrs’ if the strike continues, as more than 100 Palestinian prisoners who began their 38th day of hunger strike on Saturday have been hospitalized, according to Ma’an News Agency.

In related news, Al Ray reports that Fatah official Abu Zaideh has said that Palestinian President Mahmoud Abbas’ position to dissolve the Palestinian ministry of prisoners was instigated by pressure from extremist Israeli parties backed by the U.S. and some European countries.

“Israel always labelled these prisoners as ‘vandals’, ‘terrorists’ and ‘killers’, either they were administrative prisoners, stone-throwing children, or those charged with killing Israelis,” he said.

Of note, according to Al Ray, the two sticking points on the formation of the Palestinian concensus government are the ministry of detainees, which president Abbas wants to dissolve but Hamas refuses, and the name of the foreign minister.

Abbas was recently quoted as saying that his collaboration with Israeli occupation forces is “sacred” and would continue even if the PA forms a “government” backed by the Palestinian military resistance organization Hamas.