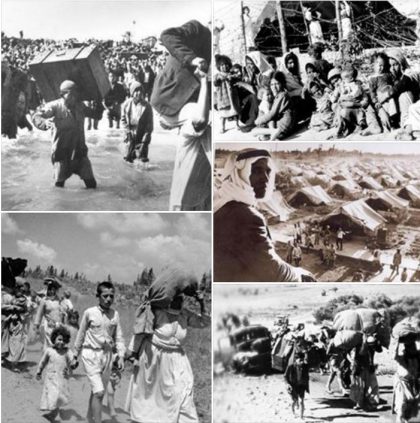 By Manuel Hassassian – The 15th May marks the Palestinian Nakba. The word Nakba means ‘catastrophe’ because that is exactly what happened in May 1948 when Palestine was wiped off the map.

With British backing, espoused in the Balfour Declaration, and British policies on the ground, Israel was created and Palestine was simultaneously destroyed. 750,000 indigenous Palestinians were violently driven out of their homes in villages and towns and forcibly dispossessed by Jewish settler militias.

Today, Israel is in ‘Nakba denial’. It will not acknowledge the ethnic cleansing of the Palestinians which was perpetrated in order to create its self-declared state.

The current extreme right-wing Israeli government, with its many fanatical elements, does not believe or want peace and does not want a two state solution.

What now? Israel is using the failure of Europe and the US to impose a solution, to act with utter and terrifying impunity, to impose a ‘solution’ of its own making.

It restricts their freedom of movement and revokes the residency permits of Palestinians living in East Jerusalem. All this amounts to a slow but calculated strangulation of the Palestinian population with an aim to make them docile and impoverished.

This immense pressure is designed to force and coerce the Palestinians to leave, to break their resistance, in a new and very modern form of ethnic cleansing. Gaza, under blockade for 10 years, will be uninhabitable by 2020 according to UN reports.

The occupied West Bank is being fragmented by illegal Israeli settlements and settler by-pass roads, cut up by security zones and the apartheid wall. Israel utterly controls the economy, the water and the movement of the whole Palestinian population. It wants to weaken the Palestinians physically, culturally and emotionally.

But Palestinians, whether in the refugee camps created by the Nakba of 1948 or in occupied Palestine, have an unbreakable connection to their land and to the memory of Palestine.

Despite Israel’s violation of their human rights and repeated violation of international law, Palestinians will continue to resist in every form possible.

UN resolution, 194 states that Palestinian refugees have the ‘Right of Return’ to their homes and to compensation for thousands of acres of the land which they lost and for their assets which were stolen, worth billions of dollars today. The truth will out. Sooner or later justice will be done by the Palestinians.

Ben Gurion, the first Prime Minister of Israel, said of the Palestinians, which the early Zionists expelled, “The old will die and the young will forget”. Many refugees from 1948 have died but the young generation of Palestinians, in fact, every new generation, will not forget! Manuel Hassassian, born in Jerusalem, is the Palestinian Ambassador in London.

Ambassador Hassassian was born in Jerusalem in 1953. He has three children.