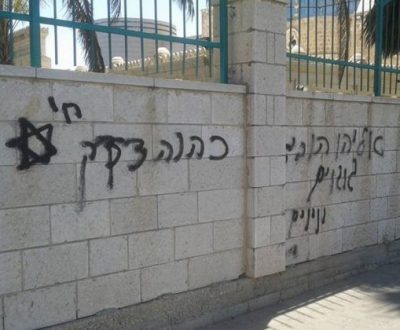 For the second time, the “Hassan Bek” mosque in Jaffa, was defaced on Saturday at dawn with racist graffiti written in Hebrew, similar to dozens of previous incidents that targeted mosques and churches, with slogans such as “Death to Arabs”, “Revenge,” and “Kahane was right.”

The graffiti defaced the western walls of the mosque; the attack is not the first against this mosque, as it was previously defaced with similar graffiti, in addition to being subject to various attacks, including throwing stones at its windows, and raising the Israeli flag on it, similar to what happened last month, on April 13. “We were not surprised by this attack; Zionist groups have been attacking it, calling for its removal, in the open, and the Police never took the issue seriously,” the Imam of the mosque, Sheikh Ahmad ‘Ajwa said, “Such violations escalated in recent weeks, and they all take place usually at dawn – the police don’t even have to work hard to catch the perpetrators if they intended to.”

“But we fear further escalation, such as attacking the worshipers themselves, God forbid – We call on all nongovernmental organization to take an active part in preventing such attacks,” ‘Ajwa added, “We all need to be effectively involved in protecting the mosque, protecting holy sites, and we need to take all needed precautions.” On June 18, 2015, Israeli extremists set on fire the Church of the Multiplication, where Christians believe that Jesus multiplied loaves and fishes, and wrote graffiti in Hebrew on the walls that read, ‘False idols will be smashed’ and ‘Pagans’.

The fire was set at about 3 am in the early hours of Thursday morning, severely damaging church offices and storage rooms. The entire church was saturated with smoke damage. In addition, Hebrew graffiti was spray-painted all over the front entrance to the church reading ‘Pagans’ in red paint. On February 26, 2015, a group of Israeli fanatics burnt a section of the Church of the Dormition, in occupied Jerusalem, causing significant damage, and wrote racist anti-Christian graffiti. The fanatics burnt a study room belonging to the Church, a bathing room, and toilet rooms, used by priests, and students of Christian Studies.

On February 25, 2015, a group of Israeli extremists burnt a mosque in the al-Jab’a village, west of the West Bank city of Bethlehem, and wrote racist anti-Arab and anti-Islamic graffiti.

On November 11, 2014, a number of fanatic Israeli settlers infiltrated into the al-Mogheer village, near the central West Bank city of Ramallah, set its mosque on fire, and wrote racist graffiti.

On June 19, 2012, A number of extremist Israeli settlers burnt a local mosque in Jaba’ Palestinian village, in occupied East Jerusalem, and defaced some of its walls.