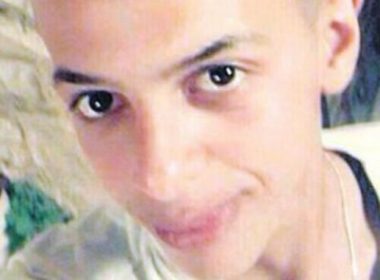 The family of Mohammad Abu Khdeir, who on July 2 2014, was abducted by Israeli terrorists, in Jerusalem, before they burnt him alive, sent an official letter to the Israeli Interior Minister and Defense Minister, demanding them to revoke the terrorists’ Citizenship and to demolish their homes.

Through its lawyer Mohannad Jabara, the family sent a letter to Interior Minister Aryeh Deri, and Defense Minister Moshe Ya’alon, demanding them to revoke the Israeli citizenship of the terrorists who burnt their son alive, and to demolish their homes.

Jabara said the demands came after Israel sentenced the main perpetrator, Yosef Haim Ben-David, to a life term and additional twenty years. Two underage Israeli terrorists who carried out the brutal killing were also sentenced; one received a life term, and the second was sentenced to 21 years.

In the letter, the lawyer made a clear statement that the terrorists who abducted and burnt Mohammad Abu Khdeir, 16 years of age, to death, said that they did so because of “ideological reasons, because Abu Khdeir is an Arab,” therefore, this crime, under Israeli law, must be labeled as a terrorist attack, under Section 1 of the 2015 law meant for preventing the financing of terror.

He added that this law authorizes the Interior Minister, and the Defense Minister, to revoke the citizenships of the assailants and to demolish their homes.

The lawyer further stated that should the ministers ignore the letter, and should they refrain from addressing it property, he will head to the Supreme Court asking the court to oblige them to do so.

The Israeli government has demolished thousands of Palestinian homes under various allegations, and pretenses, even before the Palestinians were convicted by any court.

The Palestinians whose homes were demolished were accused of attacking Israeli civilians or soldiers. Many of these alleged attackers were never convicted or even charged with crimes, but their homes were still demolished by Israeli authorities.