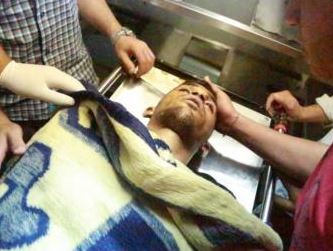 Palestinian medical sources reported, Friday, that a young Palestinian man was shot and killed by Israeli army fire near the Psagot illegitimate Israeli settlement, built on Palestinian lands belonging to residents of al-Biereh City, near the central West Bank city of Ramallah.The sources said Mohammad Ahmad al-Qatari, age 20, from al-Am’ari refugee camp, was killed by an Israeli live round to the chest. The army held his body for a few hours, and later handed it over to Palestinian medics.

Eyewitnesses said clashes took place near the western entrance of the town, and that the army fired rounds of live ammunition, rubber-coated metal bullets and gas bombs.

One Palestinian was also shot by a live round in his thigh, three were injured by rubber-coated metal bullets, and dozens were treated for the effects of tear gas inhalation.

On Friday evening, a Palestinian child was injured in the al-Lubban ash-Sharqiyya town, south of the northern West Bank city of Nablus, after being struck by a speeding settler’s vehicle at the main junction of the town.

Medical sources said Shahad ‘Oweis, 9, suffered a moderate injury, and was moved to the Rafidia Hospital in Nablus.

On Friday afternoon, several Palestinians were injured by Israeli rubber-coated metal bullets and gas bombs, during clashes which took place with Israeli soldiers invading the northern entrance of Bethlehem city. Two Red Crescent medics were also among the wounded.

The soldiers assaulted hundreds of nonviolent protesters marching in solidarity with the Gaza Strip.