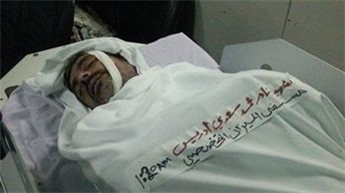 Palestinian medical sources in Hebron, in the southern part of the occupied West Bank, have reported that a young Palestinian man died Saturday, at dawn, of a serious injury suffered Friday, after Israeli soldiers opened fire at local protesters in the city.The slain Palestinian, Nader Mohammad Edrees, 40, was shot by a live round to the heart.

Doctors at the al-Mezan Medical Center in Hebron, performed a heart surgery in an attempt to save the live of Edrees, and administered 40 units of blood, but he succumbed to his serious wounds around 2 after midnight.

Prayers and the burial ceremony will be held Saturday, in Hebron.

Edrees was shot during a massive nonviolent protest against Israel’s aggression against the Palestinians in the Gaza Strip, and it’s ongoing violations in the West Bank.

At least forty Palestinians were injured in the Israeli military attack, some by live rounds and, the rest, by rubber-coated metal bullets, gas bombs and concussion grenades.

On Friday, a young Palestinian man was shot and killed by Israeli army fire near the Psagot illegitimate Israeli settlement, built on Palestinian lands belonging to residents of al-Biereh City, near the central West Bank city of Ramallah.