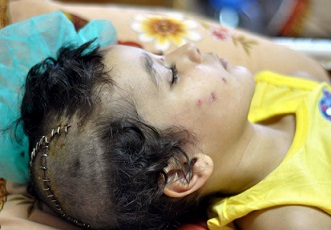 The Palestinian Ministry Of Health stated that five Palestinians were killed, and several others injured, some seriously, after the army bombarded a mosque in Nusseirat area, and the al-Maghazi refugee camp, in Central Gaza. The Ministry said resident Moath Azzam Abu Zeid, 37, died under the rubble of the al-Qassam Mosque in Nusseirat.

His remains and a number of wounded Palestinians have been moved to the al-Aqsa Hospital.

Rescue teams continued the search under rubble, and located the remains of two Palestinians, identified as Nidal Mohammad Badran, 34, and Tareq Ziad Jadallah, 25.

In addition, the Palestinian News & Info Agency (WAFA) stated that two Palestinians were killed, when the army fired a missile at a motorcycle rider, in the al-Maghazi refugee camp, in central Gaza.

They have been identified as Abdul-Hakim Suleiman al-Masdar, 56, and Mo’men Akram al-Masdar, 19.

The army also fired missiles into another mosque in the Nusseirat refugee camp, and a third mosque in Zeitoun neighborhood, south of Gaza City, destroying them, while a fourth mosque was damaged by an Israeli missile, also in Gaza City.

The Israeli army bombarded on Saturday at dawn, and during morning hours, several areas in the Gaza Strip, seriously wounding two Palestinians, and destroying two mosques. The army also fired missiles into farmlands in the coastal region.

Medical sources in Khan Younis, in the southern part of the Gaza Strip, have reported that two Palestinians suffered serious injuries after the Israeli air force fired a missile into the az-Zanna area and Bani Soheila, east of Khan Younis.

The two were moved to the Nasser Medical Center in Khan Younis.

In addition, soldiers fired missiles into two mosques in the Nusseirat refugee camp, in central Gaza, and a third mosque in Zietoun neighborhood, south of Gaza City, completely destroying them, while a fourth mosque was damaged by an Israeli missile, also in Gaza City.

Israel bombarded more than 150 mosques in different parts of the coastal region since it launched its aggression on Gaza and its people, on July 8, 2014.

In related news, the army fired missiles into several homes, a youth club, farmlands, and a neighborhood in the al-Maghazi refugee camp, in Central Gaza.

Israel drones and war jets are still flying over different parts of the Gaza Strip.

The Ministry of Health in Gaza stated on Saturday at dawn, the 1899 Palestinians have been killed, and Israeli missiles and shells have injured more than 9837 since July 8.