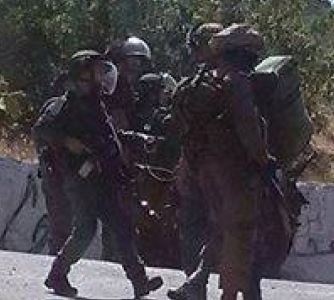 Israeli soldiers kidnapped, on Monday evening and on Tuesday at dawn, several Palestinians in different parts of the occupied West Bank, and also invaded several homes and searched them.Update: 11:06 Also on Tuesday at dawn, soldiers kidnapped five Palestinians, including a child, in Shu’fat refugee camp, and Beit Hanina, north of occupied Jerusalem.

Several armored Israeli military vehicles invaded, on Tuesday at dawn, Husan town, west of the West Bank city of Bethlehem, and kidnapped three Palestinians after breaking into their homes and ransacking them.

The three have been identified as Mohammad Abdullah Shousha, his brother Hamza, both in their twenties, and Wisam Khaled Hamamra, 23.

On Monday at night, soldiers detained two Palestinians at a roadblock near Jenin, in the northern part of the occupied West Bank.

The two, identified as Mohammad Zakariyya ‘Abbadi, 28, and Baha’ Abdullah ‘Abbadi, 24, were interrogated at the Dotan military roadblock for several hours, and released later on.

Soldiers also invaded Arraba town, and the villages of Msalia and Sanour, near Jenin, and installed roadblocks at the entrances of Jenin city, Ya’bad and ‘Arraba towns, before stopping and searching dozens of cars while investigating the ID cards of the passengers.

In addition, soldiers stationed at the Huwwara roadblock, near Nablus, kidnapped a Palestinian lawyer, identified as Mendi Samir al-Osta, 32, as he was heading back from Ramallah to his home in Nablus. The kidnapped lawyer is a former political prisoner.