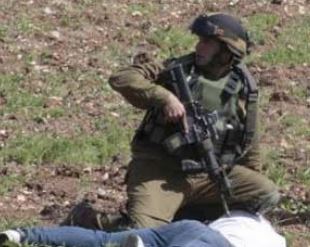 Palestinian medical sources have reported that a child, 10 years of age, was shot in the face by a rubber-coated metal bullet, fired by Israeli soldiers invading Teqoua’ town, east of Bethlehem. Another Palestinian injured near Bethlehem.Head of the Teqoua’ Town Council, Taiseer Abu Mfarreh, stated that dozens of soldiers invaded the town through its western entrance, and fired rubber-coated metal bullets, gas bombs, and concussion grenades at local youth who threw stones at them.

The wounded child suffered a moderate injury to her face, and was moved to a hospital in Bethlehem. Dozens of Palestinians suffered the effects of tear gas inhalation, and were moved to a local clinic.

In related news, a young Palestinian man suffered various cuts and bruises after falling from a high wall when a number of soldiers chased him as he was trying to enter Jerusalem where he works.

Local sources said Mahmoud Mohammad Sbeih, 23, from al-Khader town near Bethlehem, was trying to enter Jerusalem from Z’ayyim nearby area, trying to head to a construction site where he works.

He was moved to the al-Maqassed Hospital in Jerusalem.