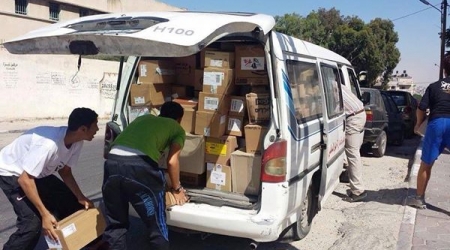 A phenomenal volunteering effort on the part of humanitarian workers has emerged with the beginning of Israel’s war on Gaza civilians. In spite of the tremendous risks implied by providing relief in the Gaza Strip, a large number of workers do not receive pay for their efforts.Al Ray reports that nearly half a million have been displaced in shelters and hospitals around the region and, now, hundreds of young men and women have volunteered to contribute to the ease of suffering in the Palestinian community by providing food and psychological support for afflicted families.

Mohammed Ali, age 22, is a disenfranchised young man who feels a strong connection with the other poor and displaced people of the region: ‘It was impossible to see the suffering of people and could not do anything,’ he says. ‘I am one of those who have been affected in the war and I feel the suffering of these people so I’m here to do something that alleviates suffering.’

Mr. Ali further states: ‘We offer psychological support to the children and try to wipe their tears and draw a smile on their faces. The work is hard but, definitely, it’s worth the suffering. Women and children escaped and were not able to take their clothes. There was no room to bring food. The priority for them was to escape from the hell, so the responsibility is greater to secure their needs; their mouths are looking for a dry crumb.’

According to Al Ray, Om Nahed Ayad is a displaced woman living in an UNRWA school, nothing relieved save her tears, stated: ‘When we escaped, we didn’t take anything with us — no food no water and no clothes — but, volunteers came from different institutions to help us. We live in a bad situation and need their help.’

Disasters and crises isolate and obscure people from one another. Hundreds of individuals have volunteered their collective time and energy into pulling victims from the debris; others offer assistance to medical staff.

Volunteer Fahad Lolo, 25, has decided to contribute by trying to help Israel’s victims in getting their food:

‘We provide food aids for the displaced. We are distributing meals and water to the families. I feel happy when I am helping others,’ he says.

Noble stories written in a time of war, Al Rays reports, to the most human degree, they begin with the very people who lost their properties and are still helping the others, and do not cease with efforts to rescue the rest.