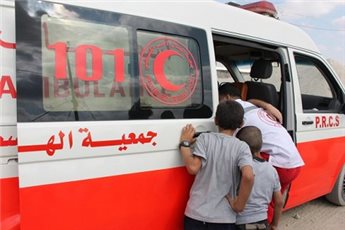 At least five people have been killed and another six seriously injured by an unexploded Israeli missile which blew up in Beit Lahiya, northern Gaza, according to witnesses and a spokesman from the Ministry of Health. Near Rafah, now for the second time, the Israeli military has breached the 72-hour truce by firing on Palestinian fishing boats. The slain men have been identified as:

Abu ‘Afesh is a Palestinian journalist working for the Doha Center for Media Freedom, and an interpreter.
Cameraman, Hatem Mousa, who works for the Associated Press and the Palestinian News & Info Agency (WAFA), has also been injured, WAFA said.

The bodies and the injured have been taken to Kamal Adwan hospital, Ma’an News Agency has reported.

According to witnesses, a police engineering team was trying to defuse an Israeli missile which hit near al-Sheikh Zayid towers previously, but did not explode, claiming that six people in all were killed.

However, a Palestinian woman died at a Jordanian hospital of serious injuries suffered in an earlier Israeli bombardment of Gaza. She has been identified as:

At least 1,957 Palestinians have been killed, and more than 10,200 have been injured, by Israeli missiles and shells since July 8. The casualties include thousands of children, women and elderly, as well as entire families.

Witnesses near Rafah, Wednesday, said that Israeli forces opened heavy fire on a Palestinian fishing boat, but reported no injuries.

A similar incident occurred the day before, when a Palestinian fishing boat came under fire by Israeli forces in the same area, making today’s incident the 2nd disruption of the temporary ceasefire by Israel since it began.

The Israeli military claims that the boat was out of its designated territory and that this is how the incident occurred.

Gaza has been under a severe economic blockade imposed by Israel since 2006, leading to frequent humanitarian crises. Backed by Egypt, Israel tightened the blockade in 2007, following an election victory by Hamas.

Israel does not even respect their own impositions on Gaza’s fishing industry and frequently fires on Palestinian fishermen, often damaging or even confiscating their equipment.