Handful of Gaza Children Evacuated to Jerusalem for Treatment 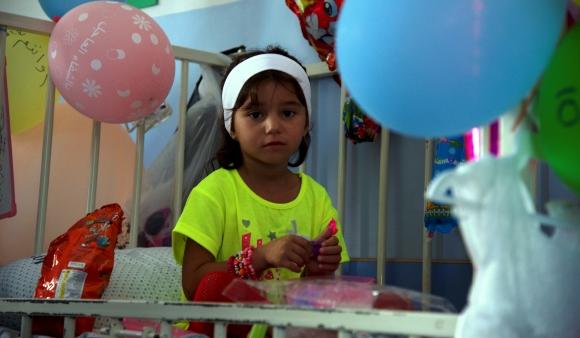 Shaima al-Masri, age 5, came to Saint Joseph’s Hospital in East Jerusalem from Beit Hanoun, in the northern Gaza Strip. According to the Defence for Children International, Palestine, it has been five weeks since she was first injured in an Israeli airstrike, but Shaima is still recovering from serious injuries that led to extensive internal bleeding.

After two surgeries in Gaza to remove the shrapnel lodged in her stomach, liver, and kidney, doctors urged human rights groups to intervene and facilitate her transfer to Jerusalem.

Over the course of the past month, DCI-Palestine reports that the assault on Gaza by Israeli ground and air forces has resulted in the deaths of more than 450 children, according to the UN.

Hospitals in Gaza are overwhelmed with the injured and, themselves the targets of military strikes, have been left unable to treat the growing number of wounded.

A fortunate minority of injured children are able to seek treatment abroad or in Jerusalem. At the end of July, however, fewer than a dozen of the nearly 3,000 children physically injured had been allowed into East Jerusalem for treatment.

“She was leaving her house with her family when the first missile struck,” Shaima’s aunt Samah told DCI-Palestine. “The first explosion killed her brother, Mohammad, who was 14. Her mother ran to his aid, and was killed by the second strike.”

Shaima’s 16-year-old sister Aseel died the next day from wounds sustained in the explosion.

“Shaima was conscious throughout. She watched it all,” says her aunt.

After 15 days in Shifa Hospital, the Israeli government granted her permission to leave Gaza accompanied by her aunt and seek treatment in Jerusalem.

Those receiving treatment outside of Gaza are not unique because of the severity of their wounds and trauma, but because they were allowed out, DCI reports. An eight-year-long Israeli imposed blockade of the Gaza Strip traps the majority of civilians inside, with travel permits almost impossible to obtain.

“The situation in Gaza hospitals is very bad now,” said Samah. “In Shifa, Shaima shared a single hospital bed with four children. They don’t have enough resources, there isn’t medicine.”

Dr. Ashraf al-Qudra, spokesperson for the Ministry of Health in Gaza, confirmed the extent of the crisis gripping health facilities in Gaza: “[patients from] Beit Hanoun Hospital, Shuhada Al-Aqsa Hospital, Mohammad Al-Dura for Children Hospital and Al-Wafa Hospitals were transferred to the rest of the hospitals in the Strip, which caused overcrowding in light of the large number of injured persons. Some patients and injured persons were placed on the floor. This is unhealthy, I know, but this is a crisis and we need to provide medical services.”

In Saint Joseph’s, Shaima has a bed to herself, and only one roommate.

A stream of Palestinians from East Jerusalem visit the hospital, bearing small gifts for the patients from Gaza. Shaima is quiet and seems dazed, but willingly shows visitors her toys.

Yazan, the five-year-old boy from Gaza with whom she shares a room, doesn’t engage with the crowd of people. His mother says he hasn’t talked much since he was injured.

While the children in Saint Joseph’s are treated in a safe environment, hospitals in Gaza have been the sites of frequent bombing by Israeli forces. Children in Gaza are unable to focus on recovery, while facing the possibility that their hospital will be bombed before they are discharged.

“We got here with the help of a human rights group. It wasn’t easy. On the way to Erez crossing, the ambulance was shot at with Shaima inside.”

Though the children allowed out of Gaza for specialized care are often in particularly critical conditions, the exit process can delay their access to treatment.

Mohammad, 14, another Gazan patient at Saint Joseph’s, was made to wait for hours while Israeli border officials searched him and his mother.

Lifting his shirt to reveal a foot long incision held together with metal sutures, Mohammad’s mother said, “They searched his whole body and all of our possessions, it took us a long time to get through.”

The end of their treatment at Saint Joseph’s won’t mark the end of the recovery for the children from Gaza: they are among the 373,000 Gazan children in need of immediate psycho-social support for their trauma. How – or whether – their needs will be addressed is unclear.

Ahmad, one of a group of children evacuated from Gaza to Jerusalem hospitals for treatment, speaks to DCI-Palestine about his ordeal. He was injured by shrapnel after a missile hit the UNRWA school where he was sheltering, in Beit Hanoun, northern Gaza. He witnessed his sister killed in the same attack.

Mohammad sits in St. Joseph’s Hospital in Jerusalem silently, a foot-long line of metal sutures stretching up his torso to his neck. The stitches are remainders of the operations he has had to remove multiple parts of shrapnel from his abdomen. Shrapnel pieces that embedded themselves in his shoulders have been left there, doctors saying that they cannot operate to remove them.

He remembers leaving his house to sit with his family in their front yard. “A sudden explosion scattered shrapnel everywhere. I was hit in my shoulders and torso. I tried to run away, but I fell down, and then someone carried me away.”

Mohammad’s mother, visibly fraught, is welcoming a stream of visitors – Palestinians from East Jerusalem who have come to express their sympathy with the children from Gaza. She speaks to DCI-Palestine: “I am thinking of my family left in Gaza. I am wondering whether I will return to find my home reduced to rubble.”

For additional case studies, with audio, video and many vital links of interest, please refer to the original article at DCI-Palestine’s official website.

————–Editor’s note: The IMEMC remembers, with gratitude and solidarity, the work of Hashem Abu Maria, Director of Defence for Children International in Hebron. Hashem was killed on Saturday, July 26th, 2014, by rounds of live ammunition fired by Israeli soldiers invading Beit Ummar town, near Hebron City. He was 45 years old at the time of his parting.