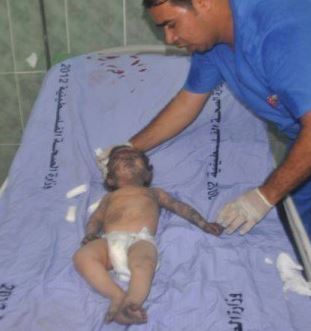 Palestinians medical sources in the Gaza Strip have reported that at least twelve Palestinians have been killed and at least 200 have been injured in the extensive Israeli bombardment targeting different parts of the besieged coastal region.The Al-Qassam Brigades, the armed wing of the Islamic Jihad said Israel assassinated the following leaders after firing, during the early dawn hours, several missiles into a home in the Sultan neighborhood, west of Rafah, in the southern part of the coastal region.

The three have been identified as:

It is worth mentioning that Abu Shammala and al-‘Attar top Israel’s extrajudicial assassination list as Israel considers them behind the capture of corporal Gilad Shalit in 2006.

The remains of al-‘Attar and Abu Shammala were moved to the Abu Yousef an-Najjar Hospital, in Rafah, while rescue teams are still trying to remove the remain from Barhoum from under the rubble.

The Maan News Agency said the Israeli Air Force fired twelve missiles into the three-story home in Tal Sultan in Rafah, completely leveling it to the ground along with several nearby homes.

Also on Thursday, a father and his son were killed in an Israeli bombardment of their homes in Beit Lahia, in the northern part of the Gaza Strip. They have been identified as.

Two more Palestinians were killed after the army fired a missile at a motorcycle rider in the Nusseirat refugee camp, in Central Gaza. They have been identified as:

The Ministry of Health said the latest strikes brings the number of Palestinians killed since midnight to twelve, while around 200 have been injured.

Palestinian medical sources in the Gaza Strip has reported that at least four Palestinians have been killed, and more than 25 injured, in Israeli bombardment targeting several homes in different areas in the besieged coastal region.

The Ministry of Health in Gaza said search and rescue efforts are still ongoing, trying to locate survivors under the rubble of bombarded homes, adding that, so far, two of the slain Palestinians have been identified as:

It added that 25 wounded Palestinians have been moved to the Abu Yousef Najjar Hospital. Many of the wounded are children and women.

Initial reports indicate around three Palestinians were also killed, and at least eight injured, in Nusserirat refugee camp in central Gaza. They were moved to the al-Aqsa Hospital in Deir al-Balah.

They were in four-story home that was completely leveled to the ground by Israeli missiles.

At least six more Palestinians have been injured in a number of Israeli air strikes targeting homes in Jabalia and Beit Lahia, in the northern part of the Gaza Strip. One of the wounded suffered a serious injury.

On his part, Abu Obaida, spokesperson of the Al-Qassam Brigades of Hamas, called on all international airlines to stop their flights to Tel Aviv, starting Thursday, at six in the morning.

He also advised the Israelis to refrain from gathering in open areas in different parts of the country, and to remain in shelters until further notice.

Israeli Prime Minister, Benjamin Netanyahu, and his Defense Minister, Moshe Yaalon, said all options are on the table, including an extended war on Gaza and a massive ground invasion.

Hamas spokesperson, Fawzi Barhoum, said the statements of Netanyahu regarding ‘destroying Hamas’ military capabilities are false claims aiming at boosting the morale of his army, and the public.

—–
Gaza Causalities, Prior To The Latest Attacks ~ Ministry Of Health in Gaza (Before the latest strikes)

The Ministry said that the Israeli army continues to target entire families, killing in recent bombardments 18 members of four families.

10 hospitals have been bombed by Israel, some completely destroyed.

36 ambulances have been bombarded and targeted, 3 of them destroyed.

23 medics and medical workers have been killed.

82 medics and medical workers have been injured.