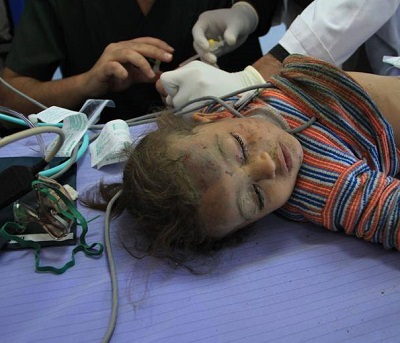 The Palestinian Ministry of Health reported Thursday night that an additional 7 people were killed by Israeli airstrikes Thursday evening, including a child, bringing the death toll to 30 on Thursday.Two men were killed in the al-Nasser neighborhood of Gaza City by an Israeli airstrike that targeted a car they were driving.
Mohammad Ahmad Abbas 45 and
Essam Muhammad al-Hasnah, 26

In Rafah, two young men were killed when an Israeli missile struck their motorcycle as they were driving on the road. They were identified as:
Marwan Mohammad Abu Shallouf, 29, and
Ibrahim Essam Hammad, 22

Another man was killed near the Rafah crossing, identified as:
Abdul Rahman Saad Abu Shallouf, 31

A man and a child were killed in the central Province, and four people were wounded. Those killed were identified as:
Mahmoud Talaat Shreiteh, 14 and
Bashir Ahmed Shreiteh, 35

This brings the total number of people killed on Thursday to 30.

Doctors have been shocked by the severity of wounds coming in to the hospitals – they have found evidence of the Israeli military’s use of banned weapons like DIME weapons.

When they explode, DIME weapons set off a chain reaction of powder in the bomb, resulting in a very dense cloud of microscopic fragments of the heavy metals – even inhaling the dust from the bomb can lead to death, according to the Ministry of Health.