They Kill Childhood, Even A Smile Is A Target 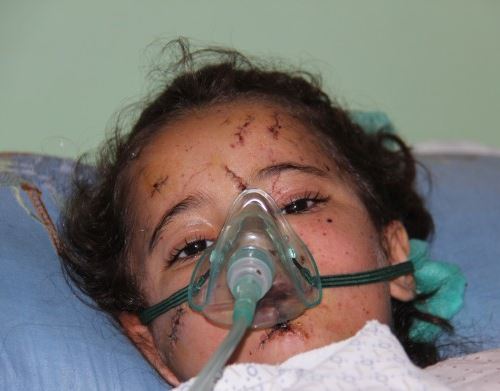 Nour Abu Haseera, 3 years of age, did not know or realize that her smile, her innocent face and smile, will be a target for Israel’s missiles of hatred and genocide. Nevertheless, it only took Israel a few second to kill Nour, and seriously wound her sister, Lama.

The two sisters went to a nearby local store, they wanted to buy some toys or candy, and they wanted to forget all the death, the smell and scene of death and blood resulting from the ongoing Israeli massacres and crimes against the civilians of the coastal region.

However, it took Israel only a few seconds to wipe out the smiles of the two children. An Israeli missile killed Nour instantly, and her sister Lama suffered a very serious injury.

Their father, Mahmoud Abu Haseera, held his two daughters so close to his heart, the same way he held them since they were born, but this time he was holding them at the Urgent Care Unit of the Shifa Medical Center.

These words were the only thing she uttered before falling into a coma due to her serious injuries.

Dr. Mohammad Abu Samra, who specializes in pediatric surgery and is the physician in charge of her treatment, said Lama was moved to the hospital after suffering various serious injuries, including shell fragmentation all over her body, a wounded liver, and so many wounds which forced the doctors to move her instantly to surgery.

The child, constantly asking about her beloved sister, was fighting for her life, was digging her way out of the sorrows of death with pure and solid determination to survive.

Eventually, she was removed from the Intensive Care Unit to another ward of the hospital, after her condition became stable.

The occupiers, the aggressors, want to kill life itself, labeling every single Palestinian as a target for its hatred, racism and apartheid.

Hundreds of Palestinians have suffered injuries that have led to permanent disabilities.

The Ministry of Health said that Israeli missiles and shells have killed 561 Palestinian children, targeting them in their own homes and neighborhoods, while more than 3189 children have been injured, hundreds seriously.

“Israel deliberately targets life itself, in Gaza, by targeting the children — the future of the country — with tons and tons of missiles and internationally-banned shells,” Dr. Yousef Abu ar-Reesh of the Ministry of Health said. “Those shells mutilated the bodies of those children and innocent civilians. The Israeli army is an army of murderers, killers, family annihilators; it is an army which commits genocide and annihilation of an entire population.”

He called on the International Community, and all countries singing the anthems of Human Rights, to perform their duties, to hold Israel accountable for its crimes and massacres, to ensure that Israel stops its grave violations of all international treaties and human rights agreements.