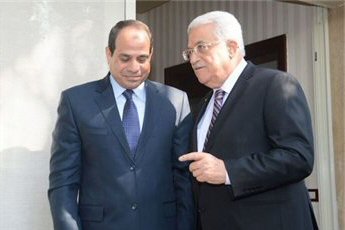 Palestinian President Mahmoud Abbas concluded, on Sunday, his three-day visit to Egypt as part of his effort to reach a permanent ceasefire in Gaza.Following a meeting with Egyptian President Abdul-Fattah al-Sisi, on Saturday, Mr. Abbas stressed that stopping the bloodshed in Gaza is a top priority for Palestinian leadership, and that both leaders agreed on what a clear and permanent ceasefire in the Gaza Strip might look like, according to WAFA.

He additionally met with Egyptian Intelligence Minister, Mohammad Tuhami, as well as delegations from the Popular Front for the Liberation of Palestine and the Islamic Jihad movement, among others.

Egyptian-brokered ceasefire talks have failed, recently, following indirect negotiations between Palestinian and Israeli sides in Cairo. However, Egypt continues to urge both sides to return to the negotiating table, in order to advance a peaceful solution.

The Gaza Strip has been under severe economic blockade since 2006, further bolstered by the Egyptian government since 2007. The end of the blockade is crucial in achieving goals set by legitimate Palestinian demands.