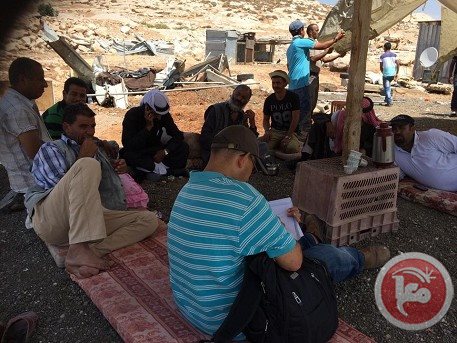 Israeli authorities, Thursday, demolished six homes near Jerusalem, leaving 51 Palestinians homeless. According to Ma’an News Agency, this brings the year’s total of displaced West Bank and East Jerusalem peoples to 752.Israeli civil administration workers were reported to have raided Sheikh Anbar neighborhood, in Zuayyim village, without prior notice, upon which a number of structures were demolished with bulldozers, under the pretext of building without a permit.

The structures belonged to the al-Saidi, al-Jahalin, and Abu al-Hawa families and included five homes and three cattle sheds.

Furthermore, one of the occupants, Khader al-Saidi, said that the authorities destroyed the homes without allowing families to remove their possessions, leading to an exchange of insults and hand scuffles between residents and Israeli forces.

Khader stated that his family had lived in the area since the 1950s, and that they had purchased the 3-dunam plot of land on which the structures were built 10 years ago.

Israel hardly ever grants Palestinians permits to build in the West Bank or East Jerusalem, while over 550,000 Israeli settlers live in illegally built developments across the region.

27,000 Palestinian homes and structures have been demolished by Israel since it first occupied the West Bank in 1967, according to the Israeli Committee Against House Demolitions.