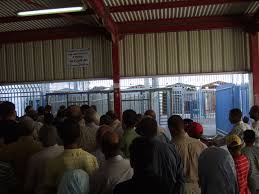 Mustafa Tamimi is an officer with the Palestinian police in the Hebron area, in the southern part of the West Bank.

The father of the two men, Abdel-Hafeedh Tamimi, told reporters that the soldiers stormed into their home while the family was sleeping, terrifying all the occupants and ransacking their belongings.

A third brother, Adham, was abducted by Israeli forces two months ago and is still being held in Israeli detention and interrogated without any charges having been brought against him.

Their father told reporters with the Ma’an News Agency that his sons were ‘brutally assaulted’ before being taken by Israeli troops.

The family has also been targeted with an Israeli demolition order on their home, issued in February, under the pretext that the home was built without a permit. Israel rarely grants Palestinians permits to build in the West Bank or East Jerusalem, yet over 550,000 Israelis live in illegal settlements across the region.

In addition, two men were abducted at the Qalandia checkpoint, which is the main checkpoint between Jerusalem and Ramallah. They were identified as Shafiq Wajih Awwad and Samed Emteir.