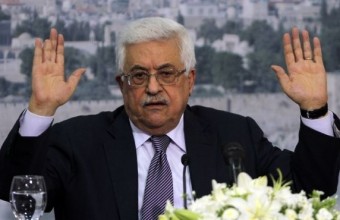 According to the Palestinian News Network (PNN), Palestinian sources have confirmed that President Mahmoud Abbas has set into action a plan comprised of 3 stages, with the aim of reaching an independent Palestinian state.The sources told London-based “Middle East” newspaper that Abbas intends to give the USA a period of time which may extend to up to four months, in order to delineate the borders of a Palestinian state, adding that they will ask Israel to show a map bearing its borders, before negotiations.

If Israelis refuses to define these borders, Palestinian leadership plans to go to the UN Security Council, under the umbrella of the Arab states, to request Israel withdraw from Palestinian areas occupied in 1967.

If this option fails, Palestinian leadership will attempt to join all international organizations, including the International Criminal Court, in proceeding with actions to prosecute Israeli leaders.

President Abbas reportedly agreed to this plan with head of Hamas political bureau, Khaled Meshaal, during their recent meeting in Qatar.

A meeting is set to be scheduled between a Palestinian delegation to include both President Abbas and Saeb Erekat, and US Secretary of State and Middle East Quartet member John Kerry, to whom Palestinians will officially present the plan, asking him to support it.

The new developments follow several past moves, by Abbas, in joining relevant international organizations, during last year’s round of failed peace talks — moves which have been essentially stalemated by Israeli threats and accusations against Palestinian leadership.