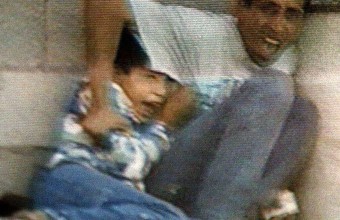 14 years ago , 12-year-old Muhammad Durrah was murdered in cold blood by Israeli forces,during the Second Palestinian Intifada, in October of the year 2000. Muhammad sheltered behind his father’s armless body, as they were both subjected to live Israeli fire for 45 minutes, related Mr. Jamal Durrah, Mohammad’s father:

‘When the shooting started, I hid behind the cement cylinder and put my son behind me to protect him. I put my arm in front of his body, but the bullets pierced my hand and it went down…

‘The shooting carried on, and my son was injured in the leg. He said ‘they hit me father, but don’t worry, I will hang on until the ambulance arrives. I will hang on.”

Mohammad’s brutal death was recorded on cameras, the PNN reports, and contributed in exposing Israel’s brutal crimes against unarmed civilians, and especially children.

Israel goes on with its humanitarian crimes today, as hundreds and hundreds of Palestinian children are killed and injured, they and their families left to endure the psychological issues of loss and genocide.