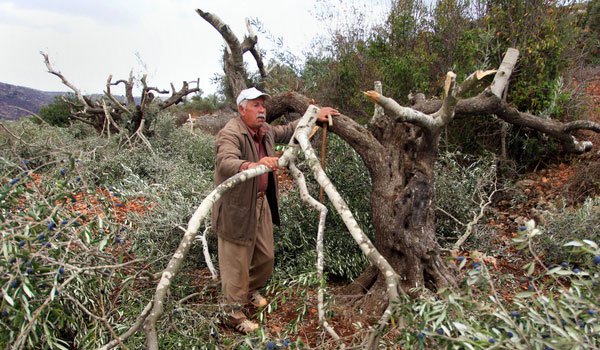 Israeli settlers attacked, on Monday, a Palestinian-owned olive grove near the northern West Bank district of Nablus. The settlers cut off the branches of 100 olive trees owned by Palestinian farmers from the Bani Yasouf village, near Nablus.

The settlers came from the illegal settlement of Tafouh.

Another group of settlers also damaged 20 olive trees owned by Palestinian farmers from the village of Awarta, also near Nablus.

Local sources are reporting an increase of attacks on Palestinian farmers by Israeli settlers since the olive harvest season began three days ago.

Beit Sahour’s Alternative Information Center reports that some 800,000 olive trees have been uprooted in the occupied West Bank since 1967, according to a joint report by the Palestinian Authority and the Applied Research Institute -Jerusalem.

Additionally, since 2002, the second year of the al Aqsa intifada, Palestinian farmers have explicitly requested Israeli and international activists to join them during the yearly olive harvest, which began this week.

The solidarity presence of activists serves to deter settler and military violence toward the farmers, and further supplies working hands during the busy month of harvest.