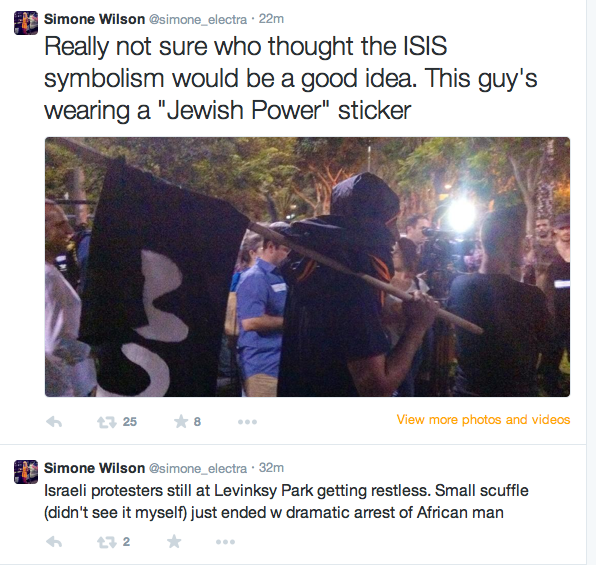 A group of right-wing Jewish Israelis, including former Knesset (Parliament) members, held a protest in Tel Aviv on Saturday chanting racist slogans against African immigrants and waving ISIS-style black flags.The flags had on them the word ‘High Court’ in Hebrew, written in the style used by the right-wing ‘Islamic’ group calling itself ISIS that has taken control of parts of Iraq and Syria. Protest organizers said that they were meant to draw attention to a decision by the Israeli Supreme Court to allow immigrants out of a detention camp where they were being held.

The detention facility, called Holot, was located in the Negev desert, and was used to house asylum seekers from Africa, none of whom had committed any crime except having attempted to seek refuge from conflicts in their home countries.

One attendee told the Jerusalem Post, “These are migrant workers and their behavior is unacceptable. Every single person who will be released from Holot [detention center because of the court’s ruling] is one more robber or rapist on the street.”

The march went from Hatikva neighborhood to Lewinsky Park, an area where a population of African immigrants live, and where many of the white Jewish Israelis who also live in the area have protested the presence of their African neighbors on many occasions.

Leading the march was right-wing settler leader Baruch Marzel and Mai Golan, who openly declared in a march two years ago, “I am a proud racist” – then running for city office and winning soon afterward.

The march follows an ongoing Twitter campaign in which supporters of Palestine have compared Israel to ISIS, dubbing it #ISIL – The Israeli State of Israel in the Levant. They have posted pictures and examples of Israeli soldiers and settlers carrying out atrocities and actions against civilians based on religion, pointing out parallels between these actions and those of ISIS in Iraq and Syria.