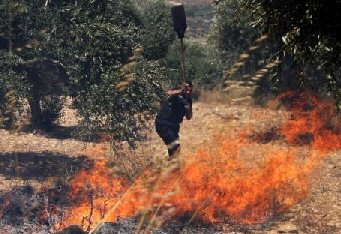 Settlers, last night, torched 30 olive trees dating from Roman times, in the village of Nahhalin, to the southwest of Bethlehem, according to a local activist.WAFA Palestinian News & Info Agency reports that a group of people from the illgal Betar Illit settlement, located to the west of Bethlehem, set fire to lands adjacent to the settlement which were planted with olive, cypress and pine trees. Thirty Roman-time olive trees were reportedly burnt.

The Nahhalin Village Profile indicates that Nahhalin village is an agricultural area, characterized by grape vines, nuts and various other crops. It also shows that 15% of local laborers work in the agricultural sector, the workers of which are listed among the economical groups most affected by Israeli occupation restrictions.

Furthermore, Nahhalin is bordered by illegal Israeli settlements: two to the north; Betar ‘Illit and Hadar Betar, and a number of which are part of Gosh Etzion settlements (Rosh Zurim, El’azar, Allon Shevut and Kfar Etzion), to the south.

Additionally, a total of 11,030 dunams, accounting for 91% of the total area of the village, was classified under the Interim Oslo Accords as ‘Area C’, a region which is under full Israeli control, and prevented from any Palestinian construction theron, or benefit without a permission from the so-called ‘civilian Israeli administration’ in Bethlehem. WAFA also notes that most of the land in Area C is agricultural land and open land, which could potentially be a major source of income for jobless villagers.

Israel has seized an area of 1,411 dunams, accounting for 11.6% of the total area of the village, in order to establish three illegal Israeli settlements.

Since the year 2000, Israeli forces have uprooted 450 olive trees, 320 grape trees, and 200 stone-fruit trees.
Movement in and out of the village is obstructed by two iron gates set up at the village entrances, permanent and mobile military checkpoints, as well as earth and concrete mounds which surround the village.