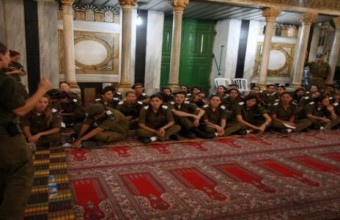 Israeli authorities announced the closing of Hebron’s Ibrahimi Mosque for Muslim worshippers, this past Sunday and Monday, under the pretext of facilitating Jewish celebrations.The PNN reports that, during these two days, Israeli forces let settlers into the mosque, by way of all its courtyards and corridors, due to the Jewish ‘Sukkot’ celebration, similar to today’s Aqsa attack and besiege, during which Muslim worshippers were attacked in order to vacate the mosque for the Jewish holiday.

The Ibrahimi mosque faces Israeli attacks on a regular basis; checkpoints are set, worshippers are searched by soldiers and sometimes denied access.

Also referred to as the “Cave of the Patriarchs,’ the mosque is the site of a brutal massacre carried out by American-born Israeli Baruch Goldstein, on February 25, 1994, during which unarmed Palestinian Muslims praying inside the mosque were shot in cold blood by Goldstein.

The attack left 29 dead and 125 wounded; Goldstein was beaten to death by the survivors.

Since then, Israeli authorities began enforcing strict security measures limiting and, in many cases, denying the entry of Muslims into the mosque.

Last September alone, the call of Azan was banned 60 times, under the pretext of ‘annoying the neighborhood residents’.

By this, Israel continues to violate international law, persecuting sanctuaries and religious freedoms.

Palestinian holy sites, both Christian and Muslim, continue to be violated by Israeli settlers, with near full complicity from security forces and little outcry from the international community.