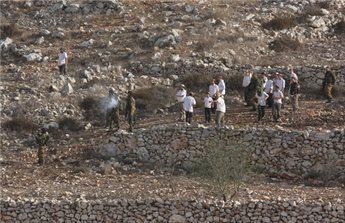 Dozens of Israeli settlers clashed with Palestinian farmers, on Thursday evening, in the Yanun valley, near the village of Aqraba, to the south of Nablus. PA official, Ghassan Daghlas, who monitors settlement activity in the northern West Bank, told Ma’an News Agency that several Israeli settlers from Itamar attacked dozens of Palestinian farmers and attempted to steal their olive crop, which belongs to the Abu Rinan family.

Clashes subsequently broke out, though no injuries were reported.

Villages south of Nablus are frequently targeted with settler violence and ensuing clashes between Palestinians and Israeli forces, as these villages are located beside the notoriously violent (and illegal) Israeli settlements of Yitzhar, Bracha, and Itamar.

Settlers frequently attack a number of local villages, destroying crops and preventing farmers from reaching their lands, according to United Nations statistics.

Settler violence against Palestinians and their property in the occupied West Bank is systematic and backed by the negligence of Israeli authorities, who rarely intervene in the violent attacks or prosecute the perpetrators.

Ma’an further reports that, in the year 2013 alone, there were 399 incidents of settler violence against Palestinians in the occupied West Bank, according to the UN Office for the Coordination of Humanitarian Affairs.