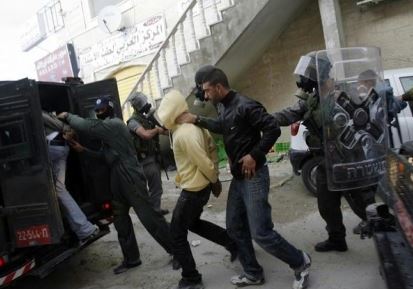 Israeli soldiers kidnapped on Sunday, at dawn and during morning hours, nine Palestinians, including a child, in different parts of the occupied West Bank, during various military invasions and home searches.Local sources in Hebron, in the southern part of the West bank, stated that the soldiers kidnapped Abdullah Mustafa Zein, 20, after invading his home in Yatta nearby town.

In the Baq’a area, east of Hebron, soldiers invaded a four-story home close to the entrance of Givat Kharsina illegal settlement, occupied its rooftop and used it as a monitoring tower.

Dozens of soldiers have also been deployed near Keryat Arba’ settlement, and near various roads and agricultural lands.

They were both moved to an interrogation center in the city.

In Ramallah, soldiers invaded the village of Ni’lin, west of the city, and kidnapped one Palestinian, identified as Mohammad Fahmi Abu Srour. Clashes also took place between the invading soldiers and local youth.

Also in Ramallah, soldiers invaded the Betunia area, west of Ramallah, and kidnapped a child identified as Dia’ Mohammad Badra, age 13, while he was playing in front of his family home, and took him to the Ofer prison.

The Tulkarem office of the Palestinian Prisoners’ Society (PPS), in the northern part of the occupied West Bank, has reported that the soldiers also kidnapped Husam Khaled Tammam at a military roadblock, east of ‘Anabta town.

Dozens of soldiers also invaded the Nablus district, in the northern part of the West Bank, and kidnapped a Palestinian identified as Salim Abu as-Sa’oud after breaking into his home and searching it.

Another Palestinian, identified as ‘Ameed Mas’oud Mer’ey, was kidnapped by soldiers stationed at the Huwwara roadblock, near Nablus.

In related news, several Israeli military vehicles invaded the village of Sanour, south of the northern West Bank city of Jenin, invaded several homes and ransacked them before handing four Palestinians military warrants for interrogation, at the nearby Salem military base.

The Palestinian Prisoners’ Society said that the Israeli Prison Administration issued an order barring detainee Ibrahim Hamed, who has been imprisoned since 2006, from all visits for three months.