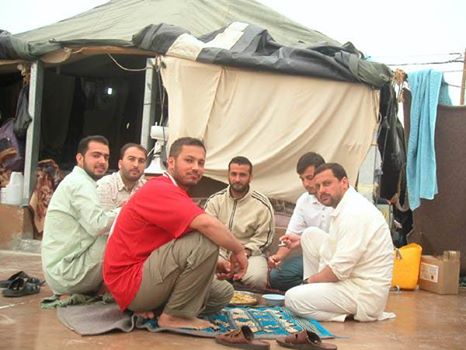 The Palestinian Committee of Detainee has reported that Israeli soldiers have escalated their attacks against Palestinian political prisoner, held at the Negev Detention camp, under arbitrary Administrative Detention orders without charges or trial. Lawyer Mo’taz Shqeirat, of the detainees’ committee, said he managed to visit the detainees two days ago, and was informed of escalated assaults and violations against them, and against their visiting family members.

Ailing detainees are still denied access to medical attention, while dozens require specialized care and attention, but are not receiving the needed treatment and medications.

The families also complained the army is forcing them to wait for hours, adding that those who eventually get to visit with their loved ones barely have a few minutes of visitation, and have to return home during very late night hours following a long day of waiting and humiliation.

Head of the Public Relations Department of the Palestinian Ministry of Detainees, Abdul-Nasser Ferwana, stated that Israeli soldiers have kidnapped more than 2000 Palestinians since July 12, after three Israeli settlers went missing, and were later found dead.

Ferwana said that the arrests are ongoing, targeting a wide range of Palestinians of different ages, including children, adding that the army kidnaps around 30 Palestinians a day.

The former political prisoner also said the majority of arrests took place in different parts of the occupied West Bank, while around 750 Palestinians have been kidnapped in occupied Jerusalem, and other areas in Historic Palestine.

More than 350 of the kidnapped Palestinians are now held under arbitrary Administrative Detention orders, without charge or trial.

Ferwana called on media outlets to continue their coverage on the plight of the Palestinian political prisoners, especially since they are subject to torture, ongoing assaults and abuse, during interrogation and after they are sent to prison, where they live under very difficult conditions in prisons that violate every principle of human rights and the Fourth Geneva Convention.

On Tuesday, August 26, The Palestinian Ministry of Detainees stated, in a report by Ferwana, that the number of Palestinians currently imprisoned by Israel is around 7000, and that it is constantly rising due to daily arrests.

Around %84.8 of the detainees are from the West Bank, %9.5 from Jerusalem and historic Palestine, and the rest (%5.7) are from the Gaza Strip, including 22 who were kidnapped during the recent Israeli military invasion into southern Gaza.

60 of the detainees have been rearrested after being freed under the Shalit Prisoner Swap Agreement, and 15 others, also freed under the agreement, but have been arrested again before the latest Israeli offensive on Gaza, and are facing life-terms, as Israel reinstated the original court rulings against them despite their release under the swap deal.

Israel also refused to release the fourth and final phase of 30 veteran detainees, held before the Oslo Agreement of 1993, including detainee Karim Younis, who has been held by Israel for more than 30 years, and was supposed to be released along with the remaining veteran detainees by the end of last March.

However, Israeli broke its own vows, and violated the American-mediated agreement that was supposed to facilitate the resumption of direct political talks.

The Ministry of Detainees provided the following information:

1. 477 detainees are serving life terms.
2. 19 female detainees are currently imprisoned; the longest serving of them is Lina Jarbouni who was taken prisoner more than 12 years ago.
3. 250 Palestinian children are still imprisoned by Israel.
4. 500 detainees are currently held under Administrative Detention orders without charges or trial.
5. Six elected former government ministers are still imprisoned by Israel.
6. 36 elected legislators are still imprisoned by Israel.
7. 1500 detainees suffer with various illnesses, and serious conditions, including cancer, heart conditions, and liver diseases, and paralysis. 14 of them permanently staying at the Ramla Prison Clinic that lacks basic supplies.
8. 205 detainees died in Israeli prisons since 1967, due to torture, medical neglect, and due to being shot and killed by the arresting officers or while in prison.
9. Dozens of detainees died shortly after their release due to diseases they contracted in prison, and were not provided the needed medical attention.