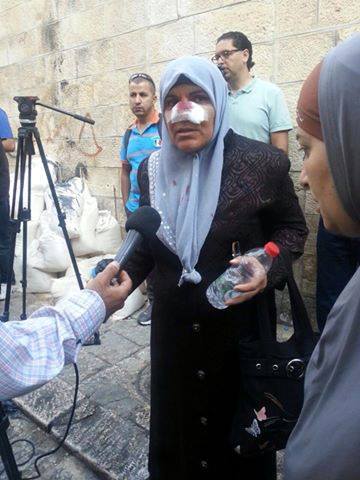 Eyewitnesses said the invasion was varied out around 6:30 in the morning, through the al-Magharba Gate, before the soldiers fired several gas bombs, rubber-coated metal bullets and concussion grenades as Muslim worshipers, mainly the elderly, were leaving the mosque.

The soldiers also attacked the worshipers with batons, forced them to leave the mosque area, and proceeded to throw gas bombs into the al-Qibli mosque, where many worshipers remained.

A woman, who suffered a facial injury, told the Shehab News Agency that the soldiers prevented the worshipers from entering the mosque and throw gas bombs and concussion grenades at them.

She added that many worshipers were injured in the mosque, at its main gates, and in its yards due to the extensive Israeli military assault.

Local guards of the al-Aqsa Mosque said the soldiers cut the power supply of the al-Qibli mosque while many soldiers occupied its rooftop, and broke one of its large windows. Fires also broke out in carpets close to the mosque’s eastern gate.

The army, the police and the settlers left the mosque area following nearly five hours of clashes with local worshipers, leading to fourteen injuries among the Palestinians who were shot by rubber-coated metal bullets, while dozens suffered the effects of tear gas inhalation.

The soldiers completely surrounded the al-Qibli Mosque, destroyed its windows on the eastern and western sides, and partially damage some doors.

The Police also decided to prevent all Muslim worshipers, including students of religious school, along with Islamic Waqf and Endowment employee, from entering the al-Aqsa mosque.

Earlier on Monday at dawn, all male worshipers below the age of 50, and all female worshipers, were prevented from entering the mosque.