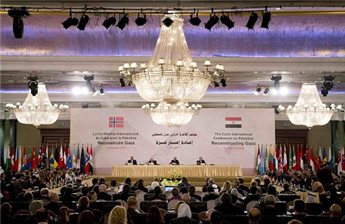 Global donors pledged several billions of dollars in aid to the devastated Gaza Strip, on Sunday, despite warnings that the coastal enclave remained a ‘tinderbox’, following Israel’s relentless bombardament of the region and a fragile ceasefire still in effect.According to AFP, Washington promised $212 million in new funds at the Cario conference, to meet what US Secretary of State John Kerry described as an ‘enormous’ challenge in Gaza.

Palestinian officials had asked for up to $4 billion, yet according to Norway’s Foreign Minister, international envoys pledged about $5.4 billion in total reconstruction aid.

‘The participants pledged approximately $5.4 billion,’ said FM Boerge Brende, in his closing statement at the conference, which Norway co-hosted.

The donors ‘committed themselves to start disbursing their assistance as soon as possible,’ he went on to say.

‘Letting Gaza fester while leaving the parties to their own devices is the surest way for setting ourselves up for another round of war another year or two down the road,’ Norwegian Foreign Minister Borge Brende told the conference.

‘The missing political framework is urgently needed, and our message to donors is clear: ‘There is no more time to lose’.’

Half of the pledges are designated for reconstruction and the rest as unspecified aid to the Palestinian Authority, according to Brende.

No date has yet been set for the beginning of the reconstruction process in Gaza, Yasir al-Wadiya, a PLO leader and participant in the conference told Ma’an, Sunday.

He said that, despite the lack of a set date, the wheels are in motion for the rebuilding to begin:

‘What was presented today (in Cairo) were the premises for reconstruction during the coming periods,’ al-Wadiya said.

‘All estimates are positive, and we talked with all parties concerning the urgent steps that need to be taken before winter.’

He added that the full implementation of the recent reconciliation agreement between Hamas and Fateh would guarantee reconstruction, and called on Palestinian Prime Minister Rami Hamdallah to ‘stay in Gaza because his tasks are big, and his responsibility is even bigger.’

Mr. Hamdallah and his unity government held their first ever meeting in Gaza, this Thursday, ahead of the conference, as Israeli officials had previously denied visting permits to the government’s West Bank-based ministers.

President Mahmoud Abbas met with US Secretary of State John Kerry, following the Cairo conference, during which the two discussed international efforts for rebuilding Gaza and reviving the Israeli-Palestinian peace process.

Other Palestinian officials were present at the meeting as well, including chief PLO negotiator Saeb Erekat, Presidential Spokesman Nabil Abu Rdeineh, the head of the Palestinian Authority’s central intelligence, Majid Farraj, and Ambassador to Cairo Jamal al-Shoubaki, according to Ma’an.

AFP reported earlier that, in his meeting with Abbas, Mr. Kerry was expected to try to dissuade him from seeking further recognition of the Palestinians at the United Nations, including joining the International Criminal Court.

Earlier, during the conference, Kerry urged renewed peace talks between Israel and the Palestinians, stating that both sides needed to be helped to make ‘tough choices’ for lasting stability.

‘The people of Gaza do need our help, desperately, not tomorrow, not next week, they need it now,’ hetold the gathering of some 30 global envoys and UN Secretary-General Ban Ki-moon, who expressed the fears of many when he told the conference the situation in Gaza remained potentially explosive.

‘Gaza remains a tinderbox; the people desperately need to see results in their daily lives,’ he said.

Kerry said the new aid brought Washington’s contribution to helping Gaza to more than $400 million over the last year alone, but there were repeated concerns about donor funds going to waste without new efforts at a long-term solution.

This summer’s conflict saw nearly 2,200 Palestinians killed, most of whom were civilians, while attacks by Gaza resistance fighters killed 73 Israelis, mostly soldiers.

The Israeli assault left the densely populated coastal enclave in ruins, displacing more than a quarter of Gaza’s population (some 1.7 million) and leaving more than 100,000 people homeless.

Israel and the Hamas party have yet to even translate their temporary August truce into a long-term ceasefire, according to Ma’an correspondence.