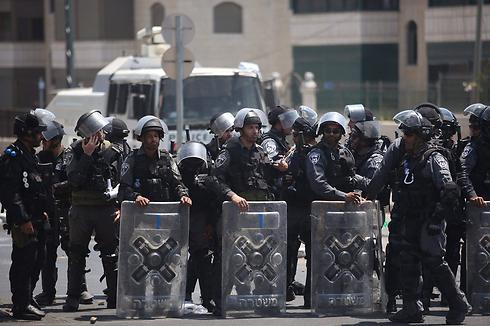 Overnight clashes took place in different neighborhood in and alleys of the Old City of occupied East Jerusalem, after the army closed the al-Aqsa Mosque, preventing all Muslim worshipers below the age of 50 from entering it. Hundreds of police officers and soldiers have been deployed in different parts of the occupied city, especially in areas close to the al-Aqsa Mosque.

The WAFA News Agency has reported that hundreds of Palestinians from the Old City and nearby areas gathered in areas close to the city walls, and near the gates of the al-Aqsa mosque.

Thousands of Palestinians will be holding Friday prayers in the streets and alleys of occupied East Jerusalem, as Israel refuses to allow them to reach the al-Aqsa mosque.

WAFA said clashes took place near the Bab al-Asbat (the Gate of the Tribes), one of the gates of the al-Aqsa mosque, after the soldiers prevented the Palestinians from entering the mosque.

The Police fired gas bombs, concussion grenades, and stun grenades, while many locals hurled stones and empty bottles at them.

Clashes also took place throughout the night in various neighborhoods, inside the Walls of the Old City of Jerusalem.

WAFA said the police closed the Old City, imposed a strict siege on its gates and the gates of the al-Aqsa mosque, and installed barricades before stopping hundreds of Palestinians and inspecting their ID cards.