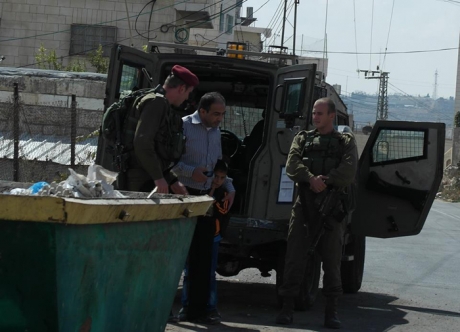 The Palestinian Centre For Human Rights (PCHR) published its weekly report on Israeli violations against the Palestinians in occupied Palestine in the period between October 2 to October 15.The report is for two weeks, instead of the usual weekly report.

The soldiers carried out 55 invasions into Palestinian communities in the West Bank, and kidnapped 51 Palestinians, including six children.

13 of the kidnapped Palestinians, including three children, have been kidnapped in occupied Jerusalem.

The PCHR said that two Palestinians died of wounds suffered during the Israeli aggression on the Gaza Strip, while the army continued to open fire on border areas in the coastal region, and continued to attack Palestinian fishermen.

It said seven Palestinians, including two children and a woman, were shot by army fire in a number of Israeli violations, while three children were wounded when an unspent concussion grenade detonated after they found it.

Israel settlers continued their attacks against the Palestinians, cut, uprooted and burned at least 124 olive trees in the northern part of the West Bank.

The settlers also burnt a mosque in ‘Aqraba town, southeast of the northern West Bank city of Nablus.

Israel also continued to the excessive use of force against nonviolent protests against the Annexation Wall and settlements in the occupied West Bank, while one child and a cameraman of the Popular Committee Against the Wall and Settlement in Nabi Saleh village, near Ramallah, were injured.

The soldiers installed dozens of roadblocks in different parts of the occupied West Bank, and obstructed traffic while searching cars and interrogating the passengers and inspecting their ID cards.

At least five Palestinians, including a child, have been taken prisoners on Israeli military roadblocks in the West Bank.

The Israeli army continued the use of excessive force against nonviolent protests against the Wall and Settlements in the West Bank, and attacked dozens of locals, Israel and international peace activists.

While military attacks are ongoing, fanatic Israeli settlers continued their assaults against the Palestinian, their lands, property and their holy sites, while the Israeli government continued to overlook the assaults and continues to keep the assaults uninvestigated.

Two Palestinians, who were seriously injured during the Israeli aggression on Gaza, have died from their wounds, while 12 Palestinians, including six children and a young woman, have bee injured in the West Bank and occupied Jerusalem.

Medical sources said on October 10, 2014, that a Palestinian identified as Arafat Soheil Tafesh, 30, from Zeitoun neighborhood in Gaza City, died of wounds suffered on July 30, during the heavy Israeli bombardment of the densely populated area, instantly killed 30 and wounding hundreds of Palestinians.

On October 11, another Palestinian died at a hospital in Khan Younis, in the southern part of the Gaza Strip, of wounds suffered on August 3 when the soldiers fired a missile at the entrance of the Rafah School for Boys, run the UNRWA.

The school was turned into a temporary shelter during the aggression.

The slain Palestinian has been identified as Abdul-Rahman Jamal Abu Lebda, 50.

On October 11, a Palestinian worker was shot and wounded while collected stones and iron close to the border fence, north of Beit Lahia, in northern Gaza.

The soldiers used automatic fire against many workers; the wounded man suffered a moderate injury and was moved to a hospital in Beit Lahia.

Attacks against fishermen in Gaza

On October 10 2014, the Israeli navy opened fire on Palestinian boats, northwest of Beit Lahia, in northern Gaza, and Rafah in the southern part of the Gaza Strip.

On October 13, the navy targeted boats near the Rafah shore, and fired missiles at boats close to the Egyptian border, no injuries were reported.

Four Palestinians, including two children, were shot and wounded by army fire when several Israeli military jeeps invaded the city to accompany Israeli settlers to the Joseph Tomb in the city.

Clashes took place following the invasion, especially east of Nablus and the center of the city. All wounded were shot by rounds of live ammunition.

On October 14, one Palestinian was shot in the face and nose by rubber-coated metal bullets fired by the soldiers while invading the al-‘Far’a refugee camp, south of the central West Bank city of Tubas.

A woman, pregnant in her seventh month, suffered various injuries to the chest when the soldiers threw a concussion grenade at her home, causing windows to shatter all over the place. She was moved to a local hospital.

On the same say, three children were injured east of Beit Ummar, north of the southern West bank city of Hebron, after the soldiers threw a concussion grenade at them as they played near their home. The children are 8-10 years of age.

On October 15, a young Palestinian woman was shot and injured by army fire in the Old City of occupied Jerusalem, after dozens of settlers stormed the al-Aqsa Mosque while hundreds of soldiers were deployed in the area preventing Muslim worshipers from entering the mosque area, or even close to it.

Use of force against nonviolent protesters

The soldiers continued to violently attack nonviolent Palestinian, international and Israeli peace activists protesting against the Wall and Settlement in the West Bank.

A child, 15, was shot by a concussion grenade to the face, many protesters suffered the effects of teargas inhalation, while the soldiers also used pepper-spray against many protesters.

The PCHR said the soldiers are ongoing with home invasions in the West Bank and Jerusalem, and continued to assault abuse and terrorize the residents in their own homes, in addition to causing serious property damage, including detonated doors and deliberately smashing furniture and electronics.

During the invasions, the soldiers force men in a room and women in a separate room, for several hours while searching their homes. At least one home was partially burnt due to Israeli concussion grenades.

Fanatic Israeli settlers continued to attack the Palestinians and their property in different parts of the occupied West Bank, and occupied Jerusalem. The attacks also targeted mosques.

On October 2, Israel handed a resident a military order forcing him to demolish his home under the pretext of being bullet without a permit near Hebron, and gave him seven days to comply.

On October 9, dozens of soldiers, bulldozers and vehicles invaded an agricultural land west of Bethlehem, and uprooted more than three Dunams close to Daniel illegal settlement near al-Khader in the Bethlehem district.

The soldiers placed a sign stating Israel will be building a public garden for Jewish settlers in the area.

On October 10, the soldiers ordered a Palestinian shepherd, in Khirbit Um Sarara, near Hebron, to remove his residential tent and his barn.

On October 7, the settlers attacked a Palestinian man was working on his land, and harvesting his olive trees, near Burin.

The man was injured after the settler threw stones at him, while Israeli soldiers failed to act.

On October 10, a group of settlers attacked lands belonging to Yasouf residents, near Salfit, and burnt many olive trees after pouring gasoline on them and surrounding them with car tires. They also cut nearly six more olive trees.

On the same day, settlers cut dozens of olive trees in the same area, while the soldiers prevented the villagers from reaching their lands.

On October 11, settlers attacked a woman from Yasouf village, causing various cuts and bruises. She and her husband were picking olive trees in their own orchard.

On the same died a teenager, and his child brother were wounded after the settlers struck them with clubs and batons while herding sheep in Yatta, near Hebron.

On October 14, fanatic settlers burnt a mosque in ‘Aqraba town, southeast of Nablus.

On October 12, Israeli settlers attempted to kidnap a 4-year-old Palestinian child in occupied East Jerusalem, as he was standing at the entrance of the building where his family lives.

Siege and restrictions on Freedom of Movement
Israel continued its illegitimate siege on the occupied territories, choking the Palestinian economy, and causing more hardships.

The siege included limiting imports and exports, and the entry of basic humanitarian supplies in Gaza, while similar restrictions remain in effects of the travel of West Bank Palestinians and their ability to import and export goods and supplies.

As the West Bank continues to be fragmented by the Wall, settlements and roadblocks, around 1.8 Million Palestinians in Gaza continued to suffer from the ongoing and deadly Israeli siege on Gaza.

Israel continues to restrict the entry of basic supplies, keeping border terminals closed, and only opening them for a few hours of certain days.

The PCHR called on the International Community to act on ending the illegitimate Israel occupation of Palestine, ending the deadly siege on Gaza, and to stop its settlement construction and expansion activities.

It said the siege on Gaza is collective punishment that violate all international treaties and laws, including the Geneva Conventions and all agreements regarding the rights of persons living under occupation.

The PCHR called on the European Union, the United Nations, and various countries around the world to ensure Israel abides by International Law, and to ensure the full implementation of the Palestinian rights of independence and liberty.

It said the International Community must act in implementing all laws and treaties, and to impose sanctions on Israel force its ongoing crimes and violations, and demanded the UN to provide guarantees preventing Israel from repeating its wars and aggressions against the Palestinians, especially in the Gaza Strip.

The PCHR added that all countries, signatories of the Fourth Geneva Convention, must prosecute war criminals regardless of their nationalities or the locations of their crimes, to ensure prosecuting all Israeli war criminals who are committing their crimes with impunity.

** A Link to the full PCHR Report in English will be provided once the PCHR publishes it.