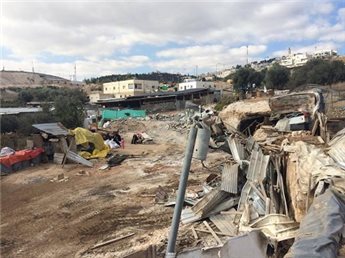 Three Palestinian homes and three structures used for livestock in al-Tur, to the east of the Old City of Jerusalem, were demolished by Israeli bulldozers on Tuesday.According to residents. bulldozers from the Beit El settlement municipality were escorted by Israeli forces into al-Tur, where they demolished homes belonging to the al-Zari family, leaving 23 Palestinians homeless.

‘Israeli forces broke the main doors, forcibly evicted us and did not allow us to take out furniture or any possessions, but instead gave their workers 30 minutes to take our possessions out of the houses,’ homeowner al-Zari told Ma’an News Agency, adding that several pieces of furniture were still inside the houses as they were demolished.

Mr. Al-Zari says that the houses and structures were built in the 1980s, and that the family had been attempting to obtain the necessary permits and licenses from the Israeli civil administration for years.

The family has apparently paid over 150,000 shekels (about $40,000) for lawyers and engineers in the attempt to evade the impending demolition, ‘but to no avail.’

A spokesperson for COGAT, the Israeli defense ministry unit in charge of civil administration in the Palestinian territories, told Ma’an via email correspondence that the 6 buildings in al-Tur ‘were illegal and were built without the necessary permits in a zone which is forbidden for construction because of security reasons, near the seam zone.

‘The decision on the demolition was taken after demolition orders were delivered and after an enforcement process was completed. We would like to note that the Supreme Court of Justice rejected the appeal submitted by the owners of some of the buildings.’

In regard to the belongings which were destroyed along with the homes, the spokesperson gave no comment.

Israeli forces regularly implement a policy of demolishing Palestinian homes in the occupied West Bank and East Jerusalem, under the pretext that the residents did not have the necessary permits.

Palestinians are rarely granted permits to build in areas under Israeli control and, according to the Israeli Committee Against House Demolitions, Israeli bulldozers have destroyed some 359 structures in the West Bank, in 2014 alone.

Also in occupied East Jerusalem, Palestinians reportedly threw a number of Molotov cocktails at a Silwan apartment building, just hours after it was taken over by Jewish settlers.

No serious damage was caused, no arrests were made and no injuries were reported.

However, the building was one of two structures housing 10 apartments that were taken over by Jewish settlers before dawn on Monday, sparking fierce local opposition.

Only three weeks ago, clashes erupted when settlers moved into more than 25 apartments in another area of Silwan.

A right-wing Israeli organization aiming to increase the Jewish presence in occupied East Jerusalem, called Ateret Cohanim, stated that the acquisitions would double the number of Jews living in that part of Silwan.

Ateret Cohanim claims that this particular area was inhabited by Jews from Yemen in the late 19th century.

Israel seized East Jerusalem in the Six Day War of 1967, subsequently annexing it in a move never recognized by the international community. Some 200,000 Israelis now live there, alongside 300,000 Palestinians, according to Ma’an.

The area is a constant flashpoint for violent confrontations between Palestinian residents and Israelis who regard the entire city as its ‘undivided capital’ and refuse to acknowledge the construction or purchase of houses in the occupied eastern sector as ‘settlement activity’.

However, Palestinians, along with supporters from the international community, continue to envision East Jerusalem as the capital of a future Palestinian state.

While Israeli government policy is the driving force behind major construction efforts in the area, the state claims that it has no say over private real-estate deals in occupied east Jerusalem.

Israeli settlers, on Tuesday, set up two new outposts in the Israeli-occupied northern West Bank after confiscating hundreds of dunams of land, an official told Ma’an.

According to Ghassan Daghlas, who monitors settlement activity in the region, told Ma’an that Israeli settlers had constructed two steel structures in the al-Dawa area of Khirbet Yanun near the Palestinian town of Aqraba.

Daghlas accused the settlers and the Israeli government of using ‘all possible means … to empty Khirbet Yanun of its (Palestinian) residents.’

A spokeswoman for COGAT did not answer calls seeking comment.

In the southern Hebron village of at-Tuwani, on Tuesday, the Israeli army notified a local resident to remove two tents and a shed, according to an activist.

WAFA Palestinian News & Info Agency reports that Rateb Jabour, of Hebron’s Anti-Settlement Committee, said that an Israeli army force, accompanied by staff from the Israeli Civil Administration, invaded the village and ordered local resident Mohammad Jabarin to remove the two tents which were sheltering his family, in addition to a shed being used to house animals.

Residents of at-Tuwani depend upon animal husbandry as their main source of livelihood. Yet, the village has fallen prey to a recurrent Israeli crackdown, according to WAFA.

On April 2 of this year, the International Solidarity Movement (ISM) reported the demolition of six Palestinian owned shelters by Israeli army forces in the village.

A similar incident occurring on March 16 was also reported by ISM, when Israeli settlers attacked four Palestinian shepherds from the nearby village of Qawawis, as they were grazing their flocks to south of the illegal ‘Mitzpe Yair’ Israeli outpost.

Over 500,000 Israeli settlers now live in settlements across the West Bank and East Jerusalem, in direct negligence of international law.

Israeli colonial settlers often act without approval to expand settlements or create new ones in the West Bank, constructing outposts which are illegal even according to official Israeli policy, and with no intervention from civil authorities.

In some cases, these settlement outposts are ‘legalized’ by Israel, and only in the most rare of cases are they ever dismantled.

Furthermore, Palestinians are rarely granted permission to build in the 60 percent of the West Bank which remains under full Israeli military control, or in East Jerusalem.

Overnight, Israeli bulldozers demolished 4 houses including two small barracks, the village of Jifiltik, near the Jordan Valley, also under the pretext that the structures had been built without construction licenses.

The demolished houses were property of Mohammed Abu Arram and his son Ihab, Qadri Bani Odeh, Suleiman Daraghmeh and Faisal Bisharat, according to the PNN.

Eyewitnesses said that Abu Arram family is made up of 13 persons, 9 of which are children now homeless. Abu Arram’s sheep will stay in the open air after demolishing their barrack.

Daraghmeh’s barrack has now reportedly been demolished for the third time. 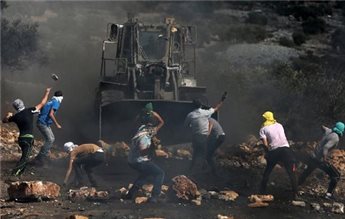