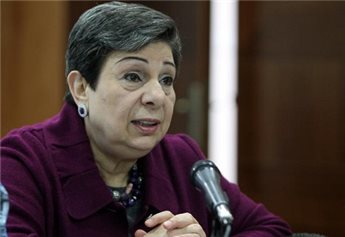 PLO Executive Committee Member Dr. Hanan Ashrawi says that Israel’s illegal steps in Jerusalem are “transforming it into an exclusively Jewish city” where Palestinian Christians and Muslims have now become temporary residents in their own homeland.“Israel is annexing Jerusalem and destroying the authenticity and character of the occupied city with its oppressive and severe laws,” said Ashrawi during a speech delivered on October 18th, in Washington DC.

According to WAFA Palestinian News & Info Agency, the speech, entitled “Framing the Current Issues in Palestine”, discussed the recent escalation of Israeli violations of international law and Palestinian human rights, and the status of Jerusalem, with its Muslim and Christian Palestinian population.

Ashrawi stated that “without Jerusalem as our capital, there can be no Palestinian state or chances for peace or stability”, adding:

“With its illegal measures of demolishing Palestinian houses, evicting Palestinians from their ancestral homes, revoking Palestinian IDs and constructing settlements and apartheid walls, Israel is transforming Jerusalem into an exclusively Jewish city where Palestinian Christians and Muslims have become temporary residents in their own homeland.”

Dr. Ashrawi further discussed current facts on the ground, future Palestinian political initiatives — including the Palestinian bid at the United Nations — the domestic reconciliation process and future prospects for elections, as well as the tragic situation of the Palestinians and Israel’s most recent campaign of terror and aggression in the Gaza Strip.

She additionally accepted the 16th Holy Land Christian Ecumenical Foundation (HCEF) 2014 Path of Peace award, which she described as a “humbling and empowering honor.”

In related Palestinian politics, Chief PLO negotiator Saeb Erekat said, Tuesday, that if the US chose to veto the Palestinian UN resolution for a timetable to end the Israeli occupation, Palestine would apply for membership to 522 international organizations and statutes.

Mr. Erekat recently issued a statement which asserted that Palestine should also seek recognition by EU countries, especially after the new Swedish prime minister’s announcement that his country would recognize Palestine and the British parliament’s symbolic vote to do the same.

‘We have nothing to lose except loss itself,’ the statement asserted, while pointing out the cruciality of seeking such recognition, in the wake of this summer’s assault on Gaza by Israel, which he said was conducted in order to ‘destroy’ the two-state solution.

‘Palestinians refuse to turn the Palestinian Authority, which was created to take them from being under occupation to independence, to a national authority to pay for salaries and security coordination (with Israel),’ he additionally stated.

Erekat’s comments also expressed his opinion that, in order for Palestinian elections to be held, the Hamas and Islamic Jihad movements should hold executive committee elections.

Defacto Palestinian President and Fateh member Mahmoud Abbas has said in recent weeks that he will submit a resolution to the UN Security Council to end the Israeli occupation of the West Bank within three years.

Should the US veto this resolution, as is expected, Abbas is to give his personal endorsement for ‘the war of international boycott of Israel’ and hold it accountable at the International Criminal Court, according to officials.

See: Abbas: “We Will Join ICC Should Our Sec. Council Bid Fail”

Critics of the PA, however, have their doubts, Ma’an reports, noting Abbas’s disavowal of the Boycott, Divestment, and Sanctions movement and repeated threats to join the ICC without following through.

Israeli and Palestinian negotiators are to resume talks on a lasting Gaza ceasefire, next week in Cairo, according to Hamas deputy leader Mousa Abu Marzouq.