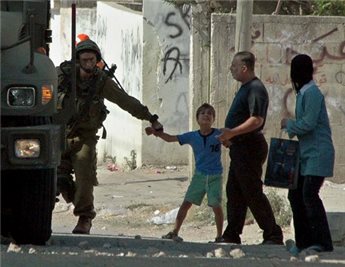 The PA’s Department of Prisoner’s Affairs said, today, that dozens of Palestinian minors jailed by Israel have recently been assaulted by prison authorities, during their time in custody.According to Ma’an News Agency, the department reported the testimonies of two Palestinian minors visited by lawyer Hiba Ighbarya, in HaSharon prison, central Israel.

16-year-old Muhammad Khaled Sharifeh, from the Old City of Jerusalem, says that he was leaving the al-Aqsa Mosque at noon, on July 7, when he was attacked by several Israeli soldiers who detained and searched him as his hands were cuffed with plastic zip ties.

Muhammad was then placed in a military vehicle, where he was seated between two Israeli soldiers and forced to keep his head down, while being transported to a detention center in the Salah al-Din area of Jerusalem.

He said that, as he raised his head up during the ride, he was vigorously beaten by soldiers.

He was further struck several times in the face, once inside the center, and eventually transferred to Jerusalem’s Russian compound jail where he was held for six days, after which he was tried and sentenced to house arrest.

Muhammad was tried again, on August 21st, and given the choice of either being deported or jailed. The boy chose jail, upon which he was then transported to a prison in al-Ramla and, then, then to HaSharon, where he was reportedly strip-searched.

Ma’an reports a similar case, in which 17-year-old Wissan Hussein Awri from Wadi al-Juz, in occupied East Jerusalem, says that he was detained on August 1st after being attacked by undercover Israeli forces in his neighborhood, at around 1 pm.

According to Wissan, one of the officers held him by his neck as another beat him. They then threw him to the ground, punched and kicked him, cuffing his hands and feet. He was then taken to an interrogation center and was interrogated while still bound.

He said that he spent 45 days in the Russian compound jail, after which he was taken to HaSharon prison, where he also underwent a strip-search.

Just this year, 15-year-old Palestinian-American Tariq Abu Khdeir (cousin to Muhammad Abu Khdeir, who recently was tortured and burned to death by Israeli settlers) was horribly beaten by Israeli police officers during protests against his cousin’s brutal murder.

The incident was caught on tape, and pictures of Tariq’s swollen face spread across social media, prompting a round of international condemnation.

Following Tariq’s release from Israeli custody to house arrest, days later, his mother Suha told reporters that if her son did not have American citizenship, ‘he would just be pushed to the side like a dog,’ rather than being freed.

According to Defense for Children International — Palestine, some 201 Palestinian children were being held in Israeli custody, as of August 2014.