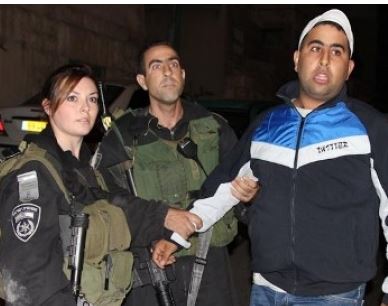 One Palestinian has also been kidnapped in the central West Bank district of Ramallah, after the soldiers invaded his home and ransacked it.

Also in Bethlehem, soldiers invaded the Mrah Rabah village, and kidnapped a Palestinian after breaking into and searching his home. The kidnapped, Yousef ash-Sheikh, 54, is a former political prisoner.

Medical sources said many schoolchildren suffered the effects of teargas inhalation after the soldiers invaded the ‘Aida refugee camp, through its eastern entrance.

The invasion led to clashes between the soldiers and local Palestinian youths.

On Monday evening, soldiers kidnapped Ahmad ‘Amer ‘Odah, 21, at the Etzion military and security base, south of Bethlehem, after he was ordered to head there for interrogation.

Eyewitnesses said around 10 Israeli military vehicles invaded various neighborhoods in Jenin, including the Industrial Zone, while several soldiers broke into a local shop, and searched it.

The Israeli invasion led to clashes while many local youths hurled stones and empty bottles at the soldiers, and the army fired rubber-coated metal bullets, and concussion grenades.

Monday: At Least 19 Kidnapped Over the Weekend in the West Bank and Jerusalem
http://www.imemc.org/article/69521